Wonder Woman is an action and rewards packed gaming experience. The game's special icon is none other than Wonder Woman, which is the main character of the game. Wonder Woman is going to use her super hero and magical abilities in order to substitute for any other icon across the reels of the game in order to create the highest possible paying combo, depending on the other icons on the reels. Only the highest combo is going to be given out with the help of the wild.

The Wild Wonder Woman can also trigger the Wonder Wilds Free Games when three of these icons land anywhere on the reels of the game. Players will get to claim eight free games on the video slot. Lastly, there is the Showdown Bonus that becomes active when players get 3x bonus icons after activating the Bonus Bet. More information regarding the payouts of the game as well as its special features can be found at the paytable of the game.

The character symbols that players will see spinning across the reels of the game include Wonder Woman and the comic book villains that she is up against.

The symbols include a fighter jet, the game's scatter logo, and poker card symbols that come in colorful designs.

Wonder Woman is certainly one of the most popular and famous female super hero characters in the world. She is astonishingly hot, beautiful, fit and fun, and plus, she came to our world to serve justice. Therefore, Next Gen Gaming has created this video slot machine that is inspired by this superhero sensation so players can get to join her in a great gaming adventure that is fun as it is rewarding.

The theme of the game is well designed through the visuals of the game; this includes the background that shows the city that Wonder Woman is defending. As for the symbols, they are inspired by Wonder Woman, the thugs and the villains she fights and the tools that she uses. All of this is offered to players in a format that has fifty wager lines. Placing the bets on these stake lines can be done underneath the reels at the control panel. 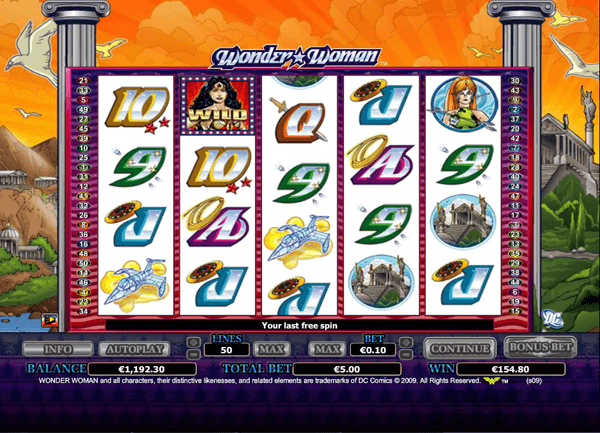 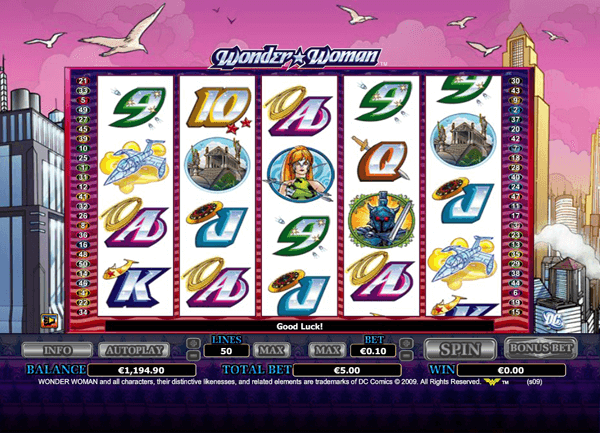 Wonder Woman by Next Gen Gaming is a 50 lined video slot that comes with 5 reels, a bonus game and free games, plus a superhero themed ride with Wonder Woman.