Wild North by Play n Go is a not only an action packed video slot machine, as it also comes with many rewarding features and symbols. This is what players can expect from a Play n Go slot, and this game delivers on that front.

The game has a wild icon, which is pretty convenient, since the game is entitled Wild North, and for that exact same reason, the wildest animal from that area represents the wild icon. It is the Wild Lynx symbol. This Lynx symbol will replace all other icons across the reels of the game to help players form the highest paying combo, on each of the lines. It will not get to replace the scatter icon of the game, which comes in the form of the Northern Lights.

The Northern Lights is the magnificent and beautiful natural phenomenon that happens only in the Northern Hemisphere. This scatter icon is going to trigger scattered rewards for lucky players, plus activating the Northern Lights bonus rounds whenever a minimum of three scatters land on the reels. There are multiple features that can be triggered, they are the Great wilderness, The Wild Lynx, The Savage Bear and the Running Reindeer.

The game does not have characters, but it does have a set of animals that live in the Northern wilderness. These animals include the big brown bear, the Lynx, the reindeer and the Owl.

The symbols include poker card icons, that vary between 10s to As and the northern lights.

Wild North is a five reeled game that offers players a truly remarkable and a magical gaming experience that takes them up North. Players will experience life in the northern wilderness as they join all of its animal inhabitants. These animals include the Lynx, the Bear, a Reindeer and the owl among others. They will appear as icons on the game’s reels, as for the reel set of the game, it is located in the snow covers Northern landscape which creates a truly immersive adventure for the players.

The game has a 40 lined setup through which players are going to claim plenty of rewards, plus a wild icon and the Northern Lights Bonus Round. 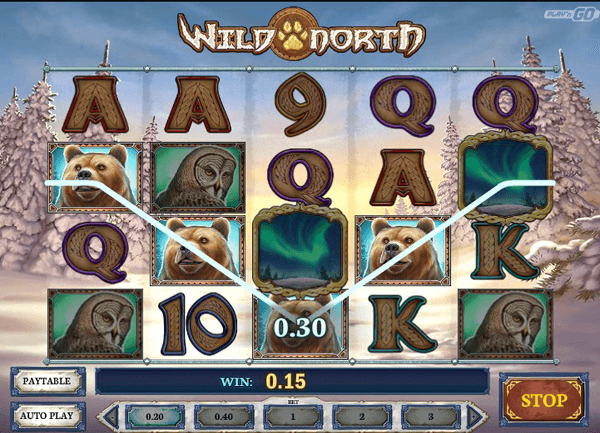 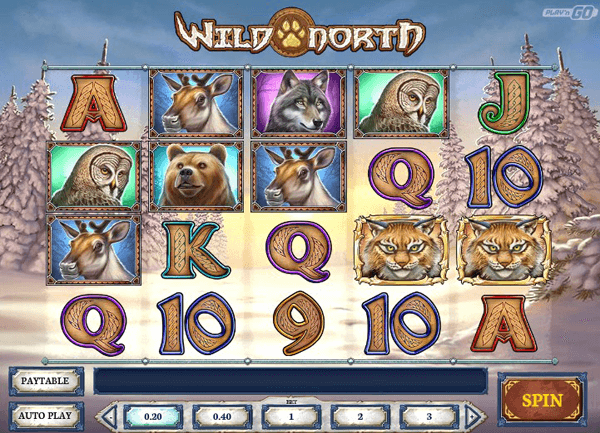 Wild North
slotadmin
May 17, 2016
7.9/10
Wild North by Play n Go is a highly lucrative slot machine that takes players to the Northern Wild for a one of a kind experience.
7.9 Review Score
Wild North

Wild North by Play n Go is a highly lucrative slot machine that takes players to the Northern Wild for a one of a kind experience.