Twin Spin Slots does not have a bonus round that is triggered during the game play. On the other hand, the game has a very special feature that is active during all the spins through the base game. This feature is none other than the Twin Reel feature, which has inspired the name of the game, Twin spin.

So whenever players spin the reels, they know that they have at least 2 matching symbols on side to side reels, which will help players increase their winning chances by helping them form a winning combo. Players can earn up to 270000 coins through the regular payouts of the game. Players can check out the different payouts that the game has to offer through the paytable of the game as they click on the “i” button under the reels on the left side.

As was mentioned, the game is themed around the classic fruit machines that we all enjoyed at land based casinos and pubs. This is why all of the symbols that appear on the reels and the 243 ways to win of the game are inspired by classic slots. They include golden bar symbols, cherries, poker card signs and sevens.

The game has one notable symbol that players should always keep an eye out, which is the Wild symbol. This icon can substitute for any of the other icons that land on the reels of the game in order to help them form a winning combo on any of the 243 ways to win that the game has. In order for a combo to give a payout, players will have to get at least 3 matching symbols from the left to the right on consecutive reels on one of the winning ways of the video slot machine.

Twin Spin is one of the latest video slot machines that are powered by Net Entertainment. The game has a unique theme and a unique game play. Twin Spin is basically a fruit machine that comes with 5 reels and comes with advanced and futuristic looking visuals. This is why all of the symbols that appear on the 5 reels of the game are inspired by classic fruit machines as they include cherries, sevens, diamonds, , bar symbols, golden bells as well as colorful card symbols.

The game’s control panel is found under the reels through which players will be able to place their wagers by going through the different betting options.  There are two betting options, the number of coins (bet level), which varies between 1 and 10, and the value of the coins (between 0.01 and 0.50 credits).

Apart from the betting options, players will also spin the reels, place max bet and view the paytable of the game at this control panel. The game also has the Auto Play feature that enables players to set a number of spins and specify a wager, there are also other advanced auto play options available. 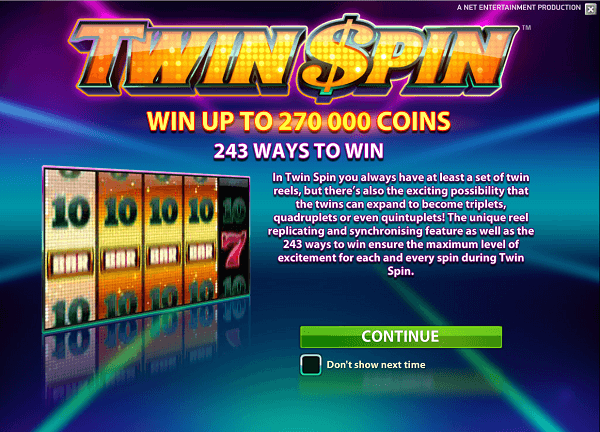 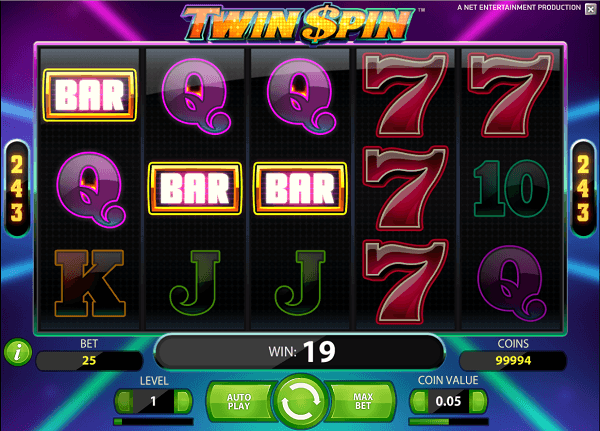 Back Secret of the Stones Slots
Next South Park Slots