Thunderstruck 2 Slots Free edition comes with two major bonus features and a wild symbol. Starting with the wild symbol, it is the game’s logo. This logo has the ability to replace any of the other icons that will land on the reels. It can appear anywhere and when it appears and helps players in getting paid, it will double the payouts. The only icon that the wild icon will not replace is the scatter symbol which is represented by Thor’s mighty hammer.

Lastly, there is the Great Hall of spins. It is a multi leveled bonus feature in which players will earn entries to by getting three Thor hammers on the reels. Each 3x hammers will give players one entry, the more entries they earn, the better rewards and features they will be able to unlock. For example, from 1 to 5 entries, players will trigger Valkyrie bonus where they will earn 10 free spins with a multiplier of 5x.

The biggest reward that the great hall of spins can give players is given when player have earned the 15th entry to the hall. They will trigger Thor’s bonus where they will earn 25 free spins with the rolling reels feature that comes with multipliers that vary from 2x to 5x.

The game’s characters are the Northern gods and they appear in the form of symbols on the reels of the game. These characters include Thor, Odin, Loki and Freya.

All of the other symbols are inspired by either the gods or the life of the Vikings. They include Asgard, the home of the gods, a Viking ship and the logo of the game plus the usual poker card icons that represent the low paying symbols.

We have talked about Thunderstruck here on freeslots.guruc before, and we mentioned that the game was so successful that inspired Microgaming to create a sequel. This is the sequel of the video slot machine, Thunderstruck II. This game offers a more satisfying experience in terms of visuals and rewards.

The game’s visuals are far more superior and the game’s symbols that land on the game’s reels and lines can also become animated ones whenever they are a part of a winning combo. Apart from the payouts that players will earn through the ways to win, they will also be able to earn even more rewards through the special bonus round of the game, the Great Hall of spins as well as through the Wild Thunderstorm feature.

Players can view all of the different features as well as the regular payouts at the paytable of the game. This paytable can be opened by clicking on the blue colored View Pays button at the control panel under the thunderous reels of the game. The biggest payout that players can earn by forming a winning combo is equal 1000 coins, players can get to earn this payout whenever they get 5x logos of the game on an way to win.

The game is also themed around the Northern Gods that were idolized and worshiped by some of the most vicious and ruthless warriors, the Vikings. These Vikings were known for having absolutely no mercy as they plundered and pillaged all neighboring cities and towns. This is why all of the symbols that will appear are inspired by either the Viking culture or the northern Gods such as Thor and Odin among others. 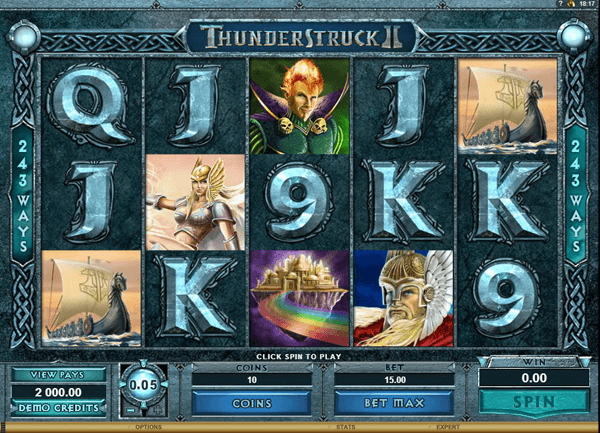 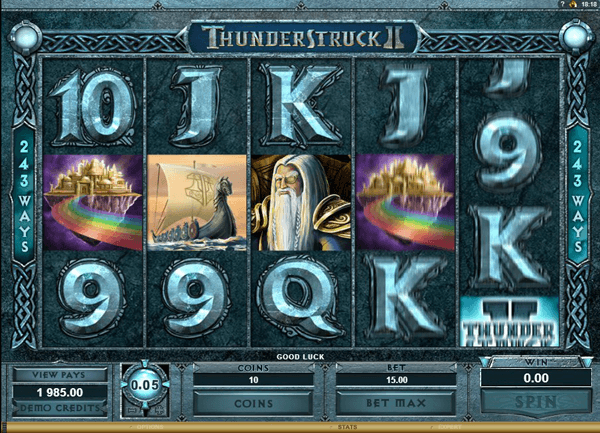 Thunderstruck 2 Slots Free
slotadmin
July 2, 2014
8.25/10
Accompany the Northern Gods once again and earn the great rewards that Thunderstruck II has to offer you.
8.25 Review Score
Thunderstruck 2

Accompany the Northern Gods once again and earn the great rewards that Thunderstruck II has to offer you.