The game has a very unique bonus feature that can take place during the base game play of the video slot machine. It is called the Starburst Wilds feature. The game has a wild symbol which is the colorful Star symbol. This icon can land anywhere on the second, the third and the fourth reel. When this symbol lands on these reels, it will not only increase the players’ chance of winning by substituting for other symbols as it will expand in order to cover the entire reel turning it into a wild reel.

It does not stop here as after it turns the reel wild, it will cause the other reels to spin one more time while the wild reel stays in its place in order to give players another chance of getting paid. If players get another wild on the other reels, the same will happen, it will cover the reel and the two wild reels will stay in their place as the other 3 reels spin. This can happen up to 3 times if players get 3 wild symbols on the 3 middle reels turning them wild and activating 3 re spins.

The game has one notable symbol which is the Starburst Wild symbol that can replace any other symbol on the reels of the game. It only lands on the 2nd, the 3rd and the 4th reel and it will turn the entire reel into a wild one and causing a re-spin for the rest of the reels.

Starburst slots is a Net Entertainment powered video slot machine that offers players an authentic slot gaming experience that is simply unmatched anywhere else. This is why it is the star game at many Net Ent powered casinos such as Mr. Green and Guts Casinos. The game falls under the 3D slots category as all of the symbols come in wonderfully designed 3D visuals. The game will take players to the outer space as the reels are set in the vast and deep space as players will be able to see the earth and its atmospheric layer in the background.

As for the symbols that will be spotted spinning on the reels and the paylines of the Starburst 3D slot machine, they include different diamonds and expensive jewels including purple diamonds, red ruby stones, golden topazes, green emeralds and blue sapphires as well as a red seven and golden bar symbols. These symbols will be spinning on the game’s 5 reels and the ten lines that the game has. Although the game might have a relatively small number of lines when compared to other games out there, the game has plenty of high paying line payouts that can give players up to 50000 coins as well as a special icon and a unique feature. Players can check out the different pays by opening the payouts table of the video slot machine.

Placing the bets is carried out at the bottom of the slot machines as players select the number of lines (from 1 to 10), the value of the coins (from 0.01 to 1 credits per coin) and lastly, the betting level (from 1 to 10). 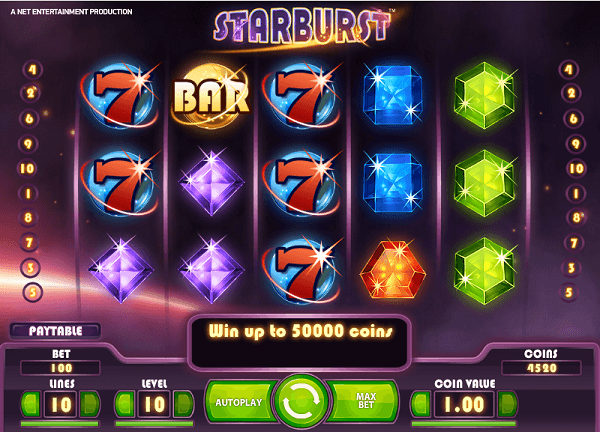 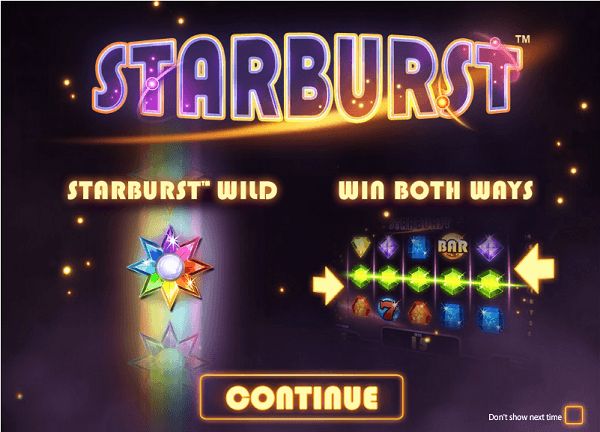 Starburst Slots
slotadmin
May 28, 2014
8.63/10
Starburst is a fast paced, high payout bonus slot game that is sure to entertain.
8.63 Review Score
Starburst

Starburst is a fast paced, high payout bonus slot game that is sure to entertain.