Sin City is quite an immersive and a rewarding 3D slot by Betsoft Gaming. Therefore, players can expect a rewards packed game. The first of the special icons is the wild. This wild would replace all other icons on the lines of the game, this includes the free spins icon. Wilds can only land on reels 3, 4 and 5 only in order to do that.

The game's character is the sexy Las Vegas night club dancer. She appears in a 3D animated character on the right side, as well as a symbol on the game's reels.

The symbols include cherries, 7s, bells, wilds, card symbols, and more. They all come in animated 3D symbols.

Sin City Nights is a new Betsoft Gaming powered slot machine. The game allows players to relive the memorable and simmering nights in Sin City. This is why players will surely be mesmerized by the bright lights and the explosive cascading game reels. All of this offers players an outstanding gaming experience that is entertaining, immersive and rewarding.

The game offers this exquisite theme in a 5 reel setup. This setup is home to a total of twenty-five wager lines. The game is offered to players in terrific 3D visuals that Betsoft is known for. Players will also see a Vegas dancer in a wild and a sexy outfit on the right side of the reels joining players as they spin the reels. 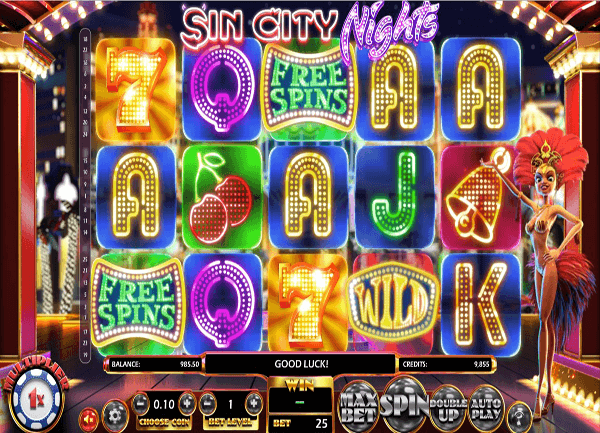 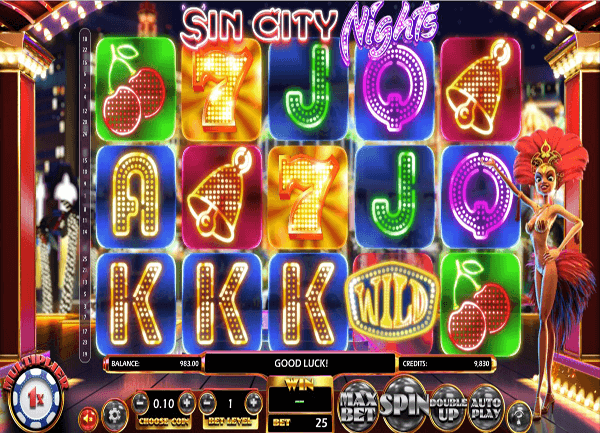 Sin City Nights is the new Betsoft Gaming 3D slot machine that comes with 5 reels and 25 wager lines. The game takes players to Sin City for a highly rewarding ride.