Rainbow Riches Reels of Gold invites players to claim their share of the golden Irish fortunes. They can do that through the unique and highly rewarding setup of the game. This is because it has 100 wager lines that are spread across the game’s 10 reels.

The game has 4 different wild icons. These wilds are the golden wilds and the logo of the game. These wilds are going to substitute for all icons, with the exception of the bonus scatter icon. They are going to replace the icons that would result in the highest paying combo possible. Also, the logo of the game wild can appear stacked and will transfer from the main set of the reels to the corresponding Colossal reels.

As for the bonus symbol of the game, it is the colorful balloons icon. Three of the bonus balloon icons can trigger the Free spins pick me bonus. Players will pick one of many bonuses with free spins, and other surprises. There is the Fairy Bonus, the Reel Win Multipliers and much more. All can be revealed at the paytable of the game.

The game’s characters include the Irish Leprechaun that comes in his traditional green outfit. There is also the fairy queen that would join players during the game play and help them get paid.

The other symbols are inspired by the Irish theme of the game. They include golden horseshoes, golden harps, a rainbow, a lucky 4 leaf clover, mushrooms, hearts, yellow diamonds and more.

Rainbow Riches Reels of Gold is a fantastic game by SG Interactive (Scientific Games). The game takes players on a wild ride into the Irish lands. They will get to claim their share of the golden fortunes of the Irish lands with the help of a Leprechaun and a fairy queen.

The game has a unique layout that hosts 10 reels with 100 lines. It also has 2 sets of reels. The one on the left and the Colossal reels set on the right. The game comes packing many special features and icons. It is also offered in exquisite and colorful visuals. 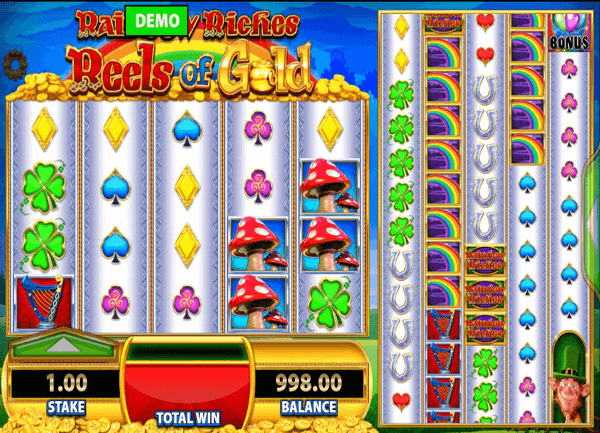 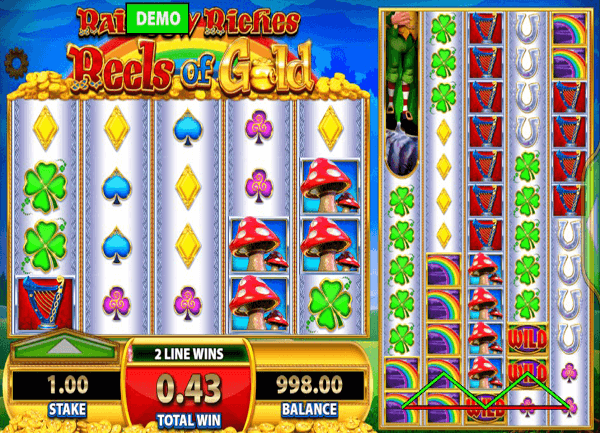 Rainbow Riches Reels of Gold by SG Interactive is a 10 reel, 100 line video slot machine that has an Irish theme that is full of rewards and features.