Ragnarok Fall of Odin is a highly rewarding video slot game, which does not really come as a surprise to online players, given the theme of the game, as well as the fact that the game is powered by Genesis Gaming.

The game comes with a wild icon, which comes in the form of the Golden Godly Emblem. This symbol is going to replace all other icons, except the scatter tree to help players in forming a winning combo. The scatter golden tree can give out scattered multiplied rewards.

The game comes with a Feature Bonus that has three rewarding levels. Players will collect runes during the game play so they can trigger and progress in the bonus feature’s levels to claim multipliers, prizes and free spins.

The characters of the game are the Nordic Gods Thor, Loki and Odin. There are also other characters from the Nordic Mythology that appear through the features such as Freyr the hell monster.

The symbols include the usual poker icons, as well as Asgard, a golden godly emblem and the wild golden tree.

Ragnarok Fall of Odin is an impressive game that players will surely enjoy. The game is going to take players on a wild, action packed slot gaming ride up north as they join the gods of the Vikings, those ruthless and vicious Northern warriors. More specifically, the game is themed around one of the great events in the Nordic Mythology, the Ragnarok event, which will see the fall of Odin, the father of Thor and Loki, which explains the title of the game Ragnarok Fall of Odin.

The game offers this amazing experience in a 5 reeled setup that is home to a total of 25 wager lines. The game’s visuals are all inspired by the theme. This is why the symbols that would appear for players across the game’s screen include Thor, Odin, Loki, Asgard, a golden tree, a golden godly emblem and poker card symbols that come in Nordic designs. All of these visuals come in high quality, which is a given, since the game comes from the rich and varied portfolio of Genesis Gaming. 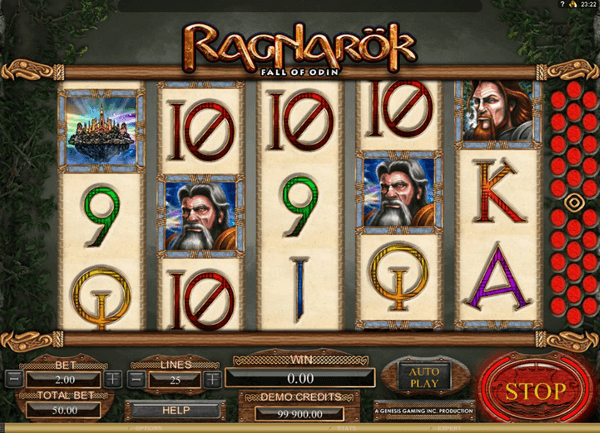 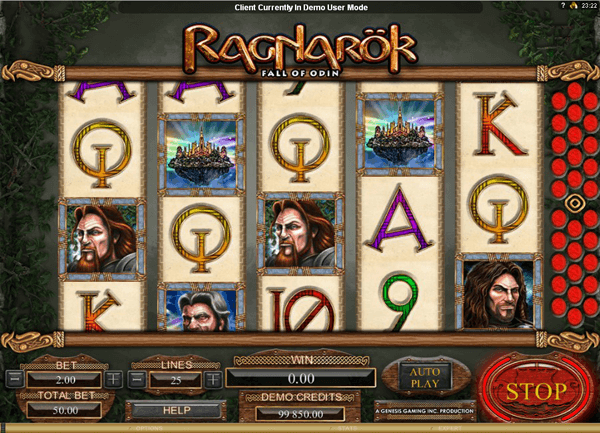 Ragnarok Fall of Odin takes players deep into the mythology of the Vikings as they join its great gods and monsters through a highly rewarding 25 lined slot machine.

Back Dragon Emperor
Next Ragnarok Fall of Odin Mobile