Queen of Gold is a 5 reeled Pragmatic Play powered slot machine that has a special 6th reel. The game is highly rewarding. This does not come as a surprise to anyone in the industry, given the fact that the game is developed by Pragmatic Play. The game has a wild icon. This wild icon comes in the shape of the golden Pharaoh mask that looks like Tutankhamen. This wild golden mask is going to help players in creating a winning combo. It will achieve that by replacing any of the other regular icons that would appear on the lines and the reels. It will replace the symbol that is going to result in the biggest payout possible.

The single symbol that the wild will not be able to fill in for is the special bonus icon. This icon is the pyramid symbol, and it is the scatter bonus. Three of these scatters will trigger the free spins round for the players. This will give players a total of 10 free games on the video slot machine. In addition, the scatter icon can give out scattered rewards.

Lastly, there is the 6th reel which has multipliers. One of them is going to be selected at random during the game play to multiply the winnings of that spin.

The game has got one character that the name is entitled after. This character is the Queen of Gold, the ancient Egyptian queen. She will appear as a symbol on the reels of the game.

The symbols include ancient golden artifacts from Ancient Egypt, a black cat, the golden mask of Tutankhamen, a scarab, the pyramid and poker card symbols.

Queen of Gold is a 5 reeled game that hosts 25 wager lines. Across the lines and the reels of the game, players will get to travel to Ancient Egypt where they will get to join the Queen of the Nile on a highly rewarding ride. Players will enjoy a greatly entertaining adventure as they claim their share of the golden fortunes.

The game has many winning chances in addition to the special features and icons that the game offers. More information about the game and its prizes can be viewed at the paytable. 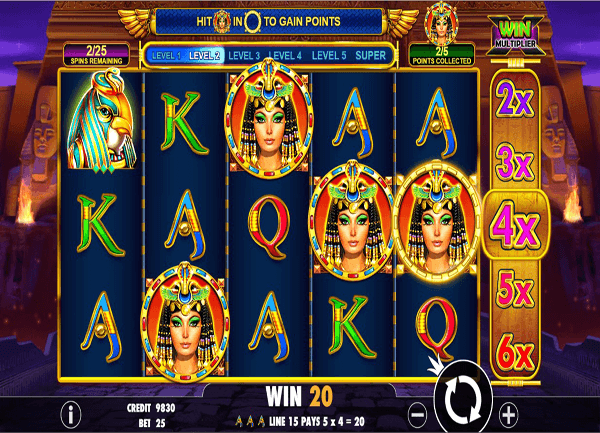 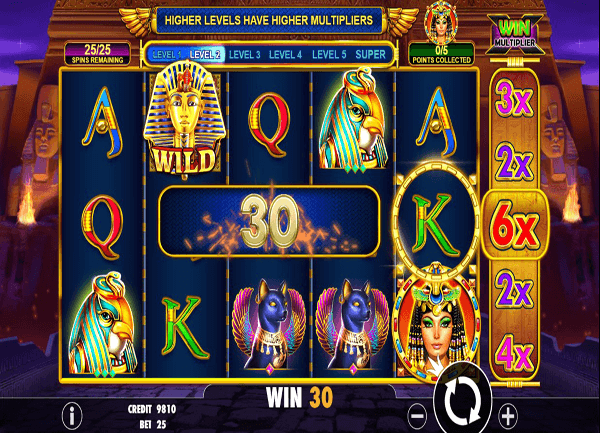 Queen of Gold
slotadmin
March 6, 2017
5.8/10
Queen of Gold is a 5 reeled, 25 lined video slot machine that has a lot of special features with an amazing theme that takes players to Ancient Egypt.
5.8 Review Score
Queen of Gold

Queen of Gold is a 5 reeled, 25 lined video slot machine that has a lot of special features with an amazing theme that takes players to Ancient Egypt.