Pirate Radio by Realistic games is fun slot that comes packed with a great set of winning chances, bonuses and features. For example, there is the black skull flag of the pirates, but since the game is about the radio channel of the pirates, the skull comes with headphones on. This wild icon has the ability to substitute for other icons on the reels of the game to help players get paid. These icons are the poker card symbols and the pirate symbols. The wild would replace the icon that would result in the highest payout possible on each of the lines.

The other special icon of the slot is the gold filled treasure chest. This is the scatter icon of the game that would give players scattered rewards depending on the number of scatters landing on the reels. Players will get to claim a reward that is equal 2x the bet (2 scatters), up to 500x the bet (5 scatters). The game also has the Pirate bonus which is activated whenever players get any 5 identical pirates on the same bet line. Also, if any 4 jolly roger symbols appear with any pirate, players will claim the Jolly Roger payout rather than activating the bonus round of the game.

The game has three characters, who are the three pirates that players are going to join in this gaming adventure. There is the blue colored deck worker, the redheaded female pirate and the purple bearded pirate.

The symbols include poker card symbols, a treasure chest filled with gold and the Jolly Rogers logo which represents the pirate skull with headphones on.

The game has a five reeled setup that has 20 wager lines that host many high paying icons as well as bonus features and symbols. The game also has the Reel 2 Reel feature that is exclusive for Realistic Games that allows players to zoom in to the reels or zoom out to see the casino floor and the entire machine. 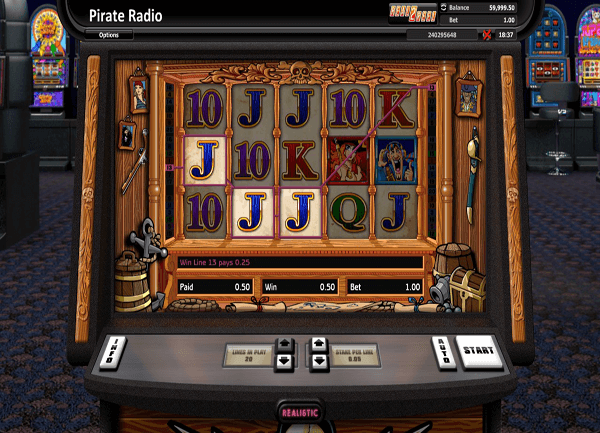 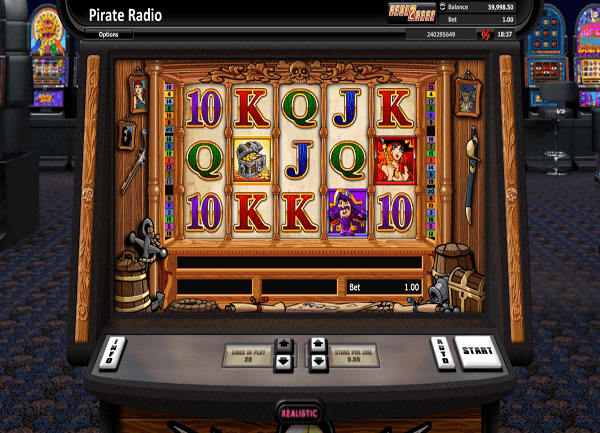 Pirate Radio
slotadmin
June 15, 2016
7.6/10
Pirate Radio is a five reeled game by Realistic Games that has 20 lines and a lot of winning chances, a bonus round and a wild.
7.6 Review Score
Pirate Radio

Pirate Radio is a five reeled game by Realistic Games that has 20 lines and a lot of winning chances, a bonus round and a wild.