Medusa is themed around the Greek mythology, which was not only full of mythical creatures and titans, but a lot of golden fortunes and treasures as well. This is why players can expect a bonus packed and a reward filled gaming experience when they decide to spin the reels of this slot. The first of the icons that have special features that the game has is the wild icon, which comes in the shape of none other than Medusa herself. Wild Medusa is going to substitute for any of the other icons, except the special ones, to create the highest possible payout possible, depending of course on the rest of the symbols on each of the lines.

That is not all, as Medusa can also trigger the Medusa Re spins when three of the Medusa icons appear across the reels. During the re spins, reel 2, 3 or 4 can turn into wild reels as the wild symbol expands to cover it all.

The logo of Medusa acts as the scatter icon that can pay great scattered rewards when at least 2 appear anywhere on the reels. Other than the scattered payouts, it can also trigger the Free Games feature when 3 of them land on the reels. Players can also collect super spins if they get the solider symbol during the free spins. All Super spin wins are going to be multiplied by 5x. There is also the Pegasus pick me bonus.

The game’s characters are all inspired by the Greek mythology as they include Medusa, Pegasus, and the Greek Solider.

Medusa is a 5 reeled pokie game that is powered by Next Gen Gaming that takes players on a lucrative and a fun filled ride. This ride takes place in Ancient Greece as players enjoy a Greek Mythology inspired adventure that is full of mythical creatures and Greek inspired items. The game is based around one of the Titans of the Greek mythology, Medusa. This titan could turn men and women into stone just by looking at them.

The game has 25 lines, a bonus pick me feature, a free games and wild re spins. All of these features, plus the line payouts of the game ensure players a lucrative ride. In addition to the payouts, the game has amazing visuals that depict the theme greatly for an immersive experience. 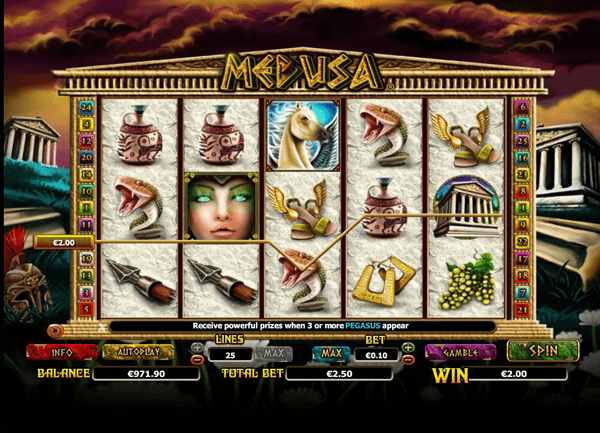 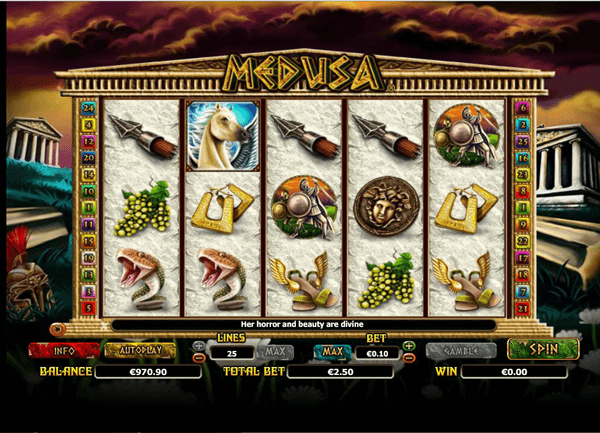 Medusa is a 5 reeled, 25 lined Greek mythology themed video slot machine that has wonderful visuals, an immersive experience and a lot of special features and bonuses.

Back Medusa Mobile
Next Butterflies Slot