Since Kummeli slot machine is obviously themed around the comedy band that had the same name, it only makes sense that the first special icon of the game to come in the form of one of the members of that group, it is the joker symbol. This joker symbol is going to help players greatly in forming a winning combo to claim a prize by substituting for other non special icons on the lines and the reels of the slot. It can replace different icons on the game’s lines to help create the highest paying combo possible on each of these lines.

The scatter icon comes in the form of the group picture of the Kummeli group. Being scatter enables players to claim scattered payouts that are multiplied by the wager that they have placed. They need to get from 2 to 5 to claim these scatter rewards, that can amount up to 300x. That is not all, as a minimum of three of these icons will trigger the free games feature. Last but not least, Kummeli comes with a highly rewarding bonus feature that can be activated when players get three of the Bonus V icons anywhere.

The character icons that are going to be appearing for players across the reels of the game are the different members of the Kummeli group. They appear in single symbols, and there is the scatter symbol which is a group photo.

The symbols include the different tools and items that the Kummeli group utilized in their shows. This includes the guitar, roses, a helmet, ice cream and more. All of the symbols come in great visuals for an immersive experience.

Kummeli was a Finnish comedy group that had some of the most insane skits that captured the heart of the Finnish people. They even starred in some movies and sang a few songs, but they were not really professional actors, although they did know how to make the viewers laugh. As a tribute to this comedic iconic group, Play n Go has created this slot.

The game has 5 reels and hosts 25 lines through which players will get to claim plenty of line pays, and trigger many features. The visuals of the game are top notch and it succeeds in providing players with an engaging experience. 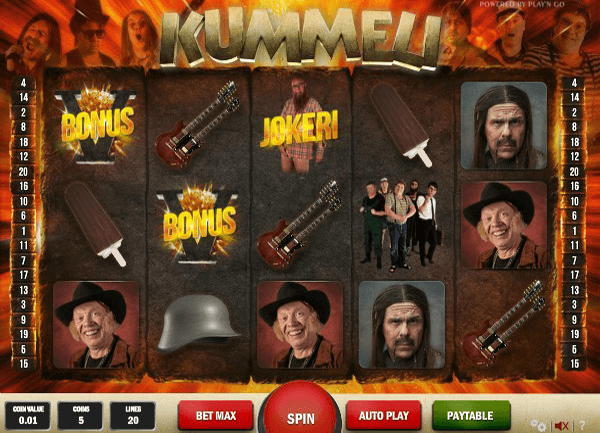 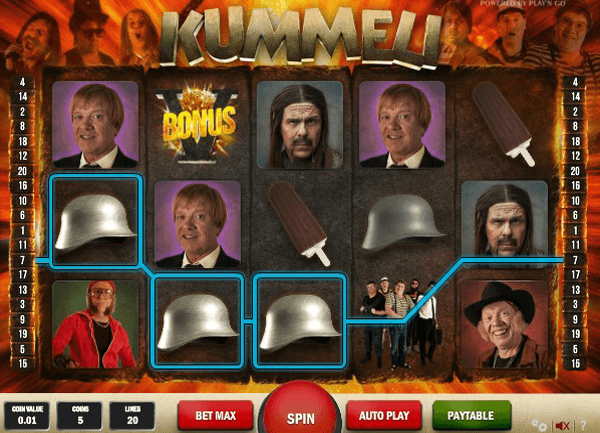 Kummeli Slot
slotadmin
May 20, 2016
7.7/10
Kummeli by Play n Go is an amazing and a fun filled slot machine that is themed around the Finnish comedy group that carries the same name.
7.7 Review Score
Kummeli

Kummeli by Play n Go is an amazing and a fun filled slot machine that is themed around the Finnish comedy group that carries the same name.