Since the game is entitled Joker Millions, so it goes without saying that no one is going to help players claim great fortunes other than the joker himself. This is why the special icon of this game is the joker. When this icon lands on each of the reels, players will get to trigger the Jackpot spin. During the jackpot spin, at least five mystery wins are going to be triggered. The game will keep on spinning as players get more joker icons on the reels of the game. Each of the Jokers will give players a mystery win that can amount up to 1000 coins.

The Joker icon is also going to help players trigger the progressive Jackpot of the game, whose value can be found at the top, above the reels. This happens when players manage to get the Joker icon on all positions on all reels of the slot machine.

Any winning combination created will have its matching icons frozen on the reels and the rest of the icons will be re spun. This will keep on happening as more instances of the frozen icon land on the reels. If players manage to fill an entire reel with the same icon, a multiplier will be triggered. The multiplier is going to be equal the number of filled reels.

The game has got one character only, which is none other than the Joker, which is not a surprise since the game is entitled Joker Millions.

The symbols are inspired by classic fruit slot machines as they include cherries, lemons, bells, sevens, watermelons and plums and more.

Joker Millions is a five reeled slot machine that has twenty give wager lines that take players on a fun and a classy ride as they join the joker. The game has a progressive jackpot, which is located at the top that players will see, increasing with every passing second. The game might have an advanced setup with modern visuals, but at heart, it has a classic and a traditional theme, the fruit slot theme.

This is why all of the symbols that are going to appear are inspired by classic slots including fruits, bells and sevens. 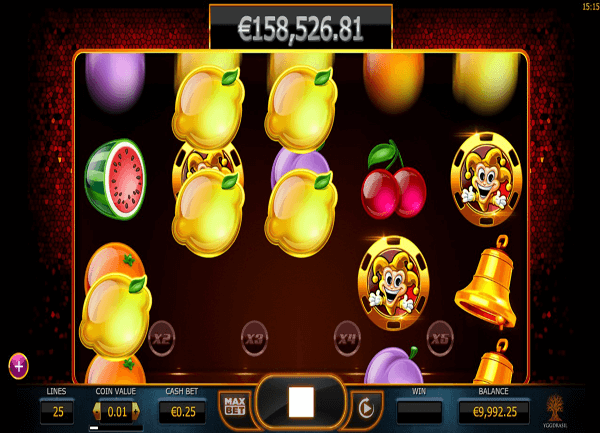 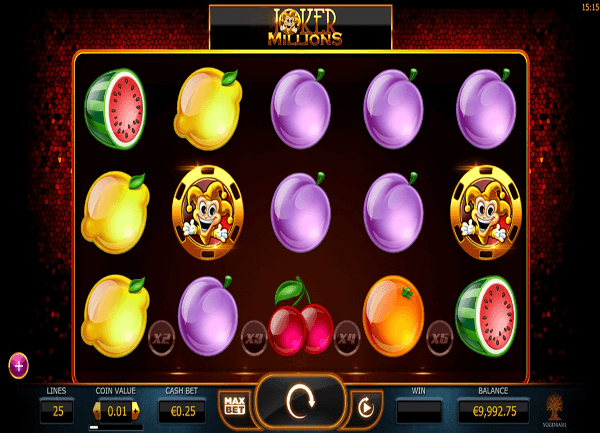 Joker Millions
slotadmin
July 17, 2016
7.5/10
Joker Millions is a 5 reeled slot machine by Yggdrasil Gaming that has a classic traditional theme that is offered in an advanced setup with modern visuals.
7.5 Review Score
Joker Millions

Joker Millions is a 5 reeled slot machine by Yggdrasil Gaming that has a classic traditional theme that is offered in an advanced setup with modern visuals.