The game has one bonus round which opens the door to multiple bonus rounds, it is called the Chamber of Spins. Players would earn one entry to the hall of Spins whenever they get at least three scatter icons on the reels of the game, which is the Lion Shaped golden Door Knob symbol. The more entries that players earn, the higher their prize will be.

The first prize is named after Amber, it gives players 10 free spins that come with a 5x multiplier. Once players earn the 5th entry into the Chamber, they will be able to earn the bonus that is named after Troy, which gives them 15 free spins along with the Vampire Bats Feature. Players who succeed in earning the 10th entry to the Chamber will earn Michael’s bonus, which is 20 free spins with the Rolling reels feature with a multiplier. Lastly, for those who earn the 15th entry, they will claim Sarah’s bonus which gives them 25 free spins along with the Wild Vine bonus.

The second bonus round, which is triggered randomly during the game play, is the Wild Desire feature. When this feature is activated during the main game, it will turn one or more than one reel into a wild one to help players get paid. It can turn up to 5 reels completely wild. During this feature, entries to the Chamber of spins are not given.

There are two notable symbols that players should keep an eye on, because when they land on the game’s reels, it means that they have a better chance of earning a payout.

The Wild Logo of the game: This symbols acts as a wild icon as it will substitute for any of the other icons that land on the reels of the game in order to form a better combo of symbols. On top of that, it also acts as a multiplier that will multiply any winnings created with its help by 2.

The only symbol that it can’t replace is the other special icon, which is the scatter golden door knob.

The Golden Door Knob: It is the scatter icon of the game. Being a scatter symbol means that it pays players greatly in the form of scattered rewards that are paid in both directions. On top of that, 3 of these symbols will give players an entry ticket to the Chamber of spins where they can earn free spins with multiple features.

Immortal Romance is a five reeled video slot game that is powered by the absolute biggest name in the industry of online gambling, Microgaming. The game is themed around the world of the Vampires but instead of going through the vicious and the gory lifestyle of the Vampires, it is about love and romance between the vampires and the human race, therefore, the game is entitled Immortal Romance. 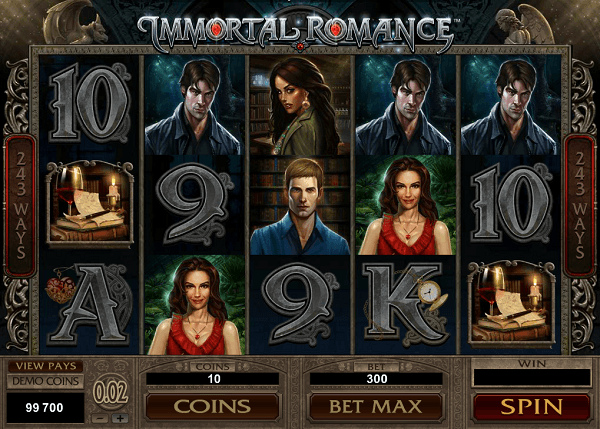 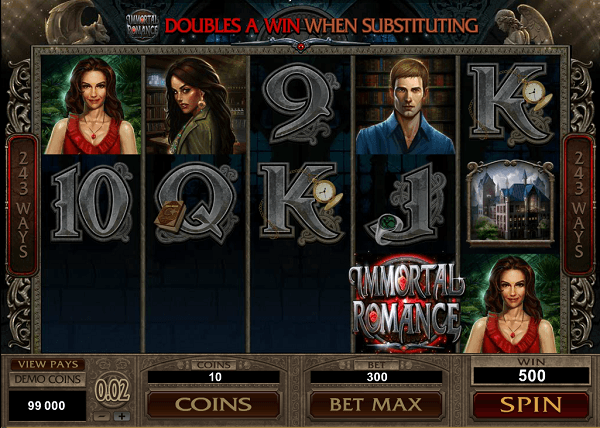 Immortal Romance slot machine is one of the best slots from Microgaming. It's fairly popular because of it's Vampire theme.

Back Hall of Gods
Next Magic Portals