Hot Sync is a highly rewarding video slot machine that is developed by the team at Quickspin. This is why players can expect a set of special features and many winning chances whenever they decide to give this game a few spins. The first of the special icons that the game has is the wild icon. This wild is the golden wild icon. The wild can replace all other icons appearing on the reels of the game to help players claim a prize. It will replace the icon that would result in the biggest pay. The wild icon will not be able to replace the other two special icons that the game hosts. These two special icons are the Hot Sync Wild and the Bonus Game scatter.

The first special icon, which is the Hot Sync Wild, can appear during the base game. When at least 2 of these icons land on different reels, they will trigger the Sync Feature with the re spin. These two reels will spin in sync, while adding new wilds across the reels. The Free Spins game cannot be triggered during this feature.

The game has a classic theme that is all about traditional slots and fruits, therefore, players won’t find any character icons or visuals appearing across the reels.

The symbols include classic symbols such as cherries, watermelons, golden bells, golden stars, diamonds, the golden wild and more. They all come in great visuals that provide players with a visually satisfying experience.

Hot Sync is a 5 reeled game that has 20 wager lines for players to place their wagers on. The game has a classic theme that is all about traditional icons and fruits. The game's 20 lines are fixed, as they are all active during the game play. The game has a traditionally golden outline set of reels with the control panel underneath the reels.

The game has multiple bonus features and icons that can make the players' stay at the game quite rewarding. This includes a wild, a Hot sync Wild and a free games feature. 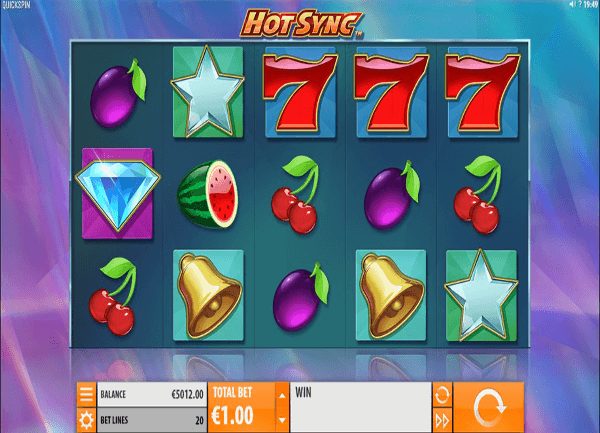 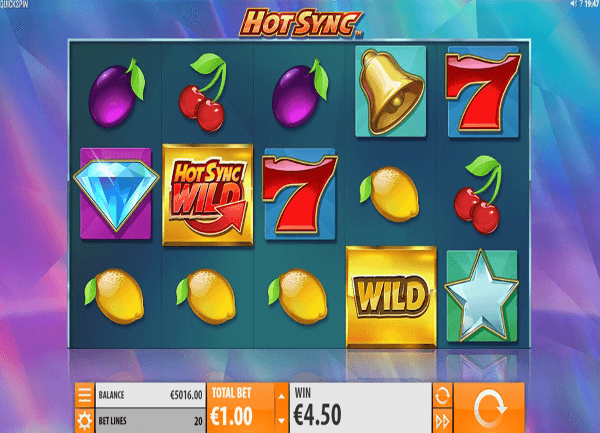 Hot Sync
slotadmin
February 17, 2017
7.6/10
Hot Sync is a five reeled game that got 20 wager lines through which players can claim a lot of rewards. The game has a classic theme with advanced visuals and features.
7.6 Review Score
Hot Sync

Hot Sync is a five reeled game that got 20 wager lines through which players can claim a lot of rewards. The game has a classic theme with advanced visuals and features.