Hong Kong Tower by Elk Studios is a highly rewarding slot machine that has a lot to give to players in terms of rewards and payouts. For example, the game has the bonus round, which is entitled the Wheel of the Sky bonus. In this bonus, players will be taken to the skies, with thunder and rain to a second screen. In this second screen bonus, players will see three wheels that they will spin for various prizes. Players will need to get three of the bonus golden Ying Yang icons in order to enter the bonus round. Getting four or five of these symbols would give players an additional life or two lives respectively.

Other than the bonus icon, there is the mystery symbol, which is the logo of the game. This mystery icon would reveal into any other icon randomly, at the end of any spin to help players get a reward. A revealed bonus icon will count as 5 bonus symbols, which will trigger the bonus, and gives players 2 additional lives for the bonus round. During that bonus round, there is a level up that would enable players to transition to the higher wheel for better rewards.

The game does not have any characters that would appear as symbols or as visuals surrounding the reels of the game.

Hong Kong Tower is a 5 reel game that comes with 99 lines. The game takes players to the Chinese metropolis, Hong Kong, which is all about the high rise skyscrapers. This is why players will see that the set of 5 reels is located on the façade of one of these skyscrapers. The game comes in great visuals that are paired with wonderful animation that would surely entertain players.

The slot also comes packing a great set of special features and icons that players can take advantage of during the game play. More information about the game’s rewards and features can be viewed at the paytable. 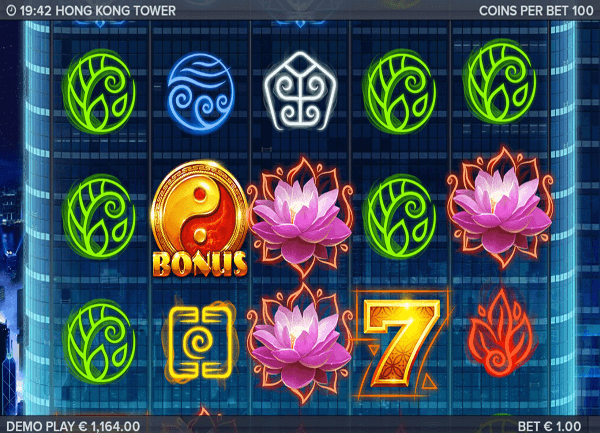 Hong Kong Tower
slotadmin
April 22, 2017
8/10
Hong Kong Tower is the latest game to be released by Elk Studios. The game has 99 lines and 5 reels with a highly rewarding bonus round and a mystery symbol.
8 Review Score
Hong Kong Tower

Hong Kong Tower is the latest game to be released by Elk Studios. The game has 99 lines and 5 reels with a highly rewarding bonus round and a mystery symbol.