Gypsy Moon is a 5 reeled game that has 30 lines, as well as the super ways format that can give players 243 ways to win. Apart from the ways to win that the game has, there are a couple of special symbols that can reward players greatly through their unique features.

The first of the special icons that the game has is the wild symbol. This wild is none other than the Gypsy witch herself. This witch will use her magical powers in order to substitute for all of the other icons that would appear on the reels of the game. The witch is going to replace the icon that is going to result in the biggest payout possible, depending on the remaining icons on each of the lines and ways to win.

The only symbol that the wild icon will not be able to replace is the scatter bonus icon. This scatter icon is the magical mysterious symbol. This symbol can give scatter prizes to players who get from 3 to 5 of them anywhere on the reels. That is not all, as the same number of scatters will enable players to enter the free games feature.

The game has one character. This character is the gypsy witch and fortune teller that the players will join throughout this magical experience.

The other icons include candles, potions, a crystal ball, a spell book, mirrors, flowers, a ring, a deck of cards, and more. All symbols come in great visuals.

Gypsy Moon is a 5 reel slot that comes with 30 paylines. That is not all, as players can choose to activate the Super Pays feature, which turns the game into a 243 ways to win slot that has a lot of winning chances for the players. The game has a gypsy theme to it, as it invites the players to join the Gypsy witch as they enter the realm of gypsy magic.

Players will have the chance to claim their own share of the gypsy’ fortunes through the 243 ways to win, as well as the bonus features and special icons that the slot has to offer. 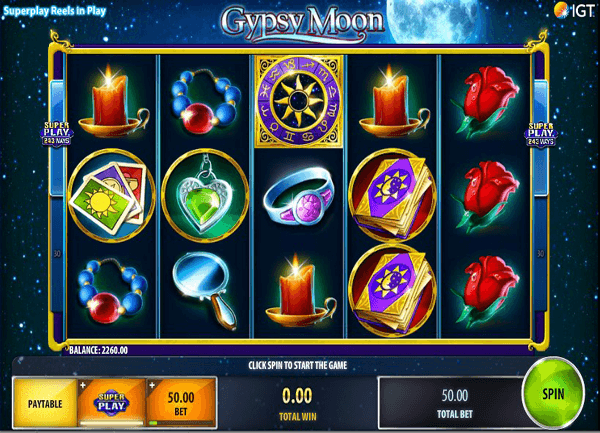 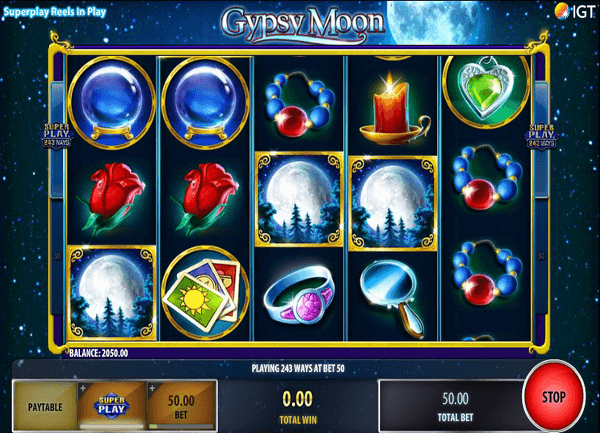 Gypsy Moon
slotadmin
February 21, 2017
7.6/10
Gypsy Moon is a 5 reeled game that has 243 ways to win, and 30 lines. The game has a gypsy theme that hosts a lot of bonus features and winning opportunities.
7.6 Review Score
Gypsy Moon

Gypsy Moon is a 5 reeled game that has 243 ways to win, and 30 lines. The game has a gypsy theme that hosts a lot of bonus features and winning opportunities.

Back Gypsy Moon Mobile
Next Well of Wonders