The game has the Avalanche Multipliers feature as well, which is technically not a bonus round since it is available at any time during the game play, but it is still quite rewarding and worth mentioning in the Bonus Round section. In this slot, the symbols that form the reels come in the shape of squared rocks that fall from above, and whenever players manage to get at least three matching rocks from the left to the right on side to side reels to form a winning combo, these matching symbols will then explode and disappear causing an avalanche of new rocks falling from above to fill their place.

This will result in the formation of new combos and a multiplier, if players win again, the same will happen until they do not form a winning combination. The Multiplier starts at x1 and ends at x5.

The game has one character, which the game is named after, Gonzo. Gonzo will accompany you throughout the game play as he stands on the left side of the reels with his fire torch in order to guide you and help you earn as much payouts as possible.

Free Fall Symbol: The Golden Mayan symbol that is carved into the squared stone is the free fall symbol. Three of these anywhere on the reels would trigger 10 Free Falls for lucky players.

The Wild Question Mark: The squared stone block that has a golden “?” symbol on it is the game’s wild icon that can replace the other stone blocks on the lines and the reels of the game in order to help players get paid.

Gonzo’s Quest is video slot machine that is brought to players from the gaming portfolio of none other than Net Entertainment. It is one of the most popular and highly successful slot machines of the gaming developer. In this game, players are invited to accompany Gonzo, the Latin explorer in his adventures as he sets sail for new lands in order to discover new places as well as find golden treasures and fortunes.

Players will not only enjoy an exciting game with an equally exciting theme as they will also enjoy a highly rewarding game that comes with a great set of features and special symbols. Players will be quickly drawn into the theme of the game and the story of the slot through the high quality animated intro clip that will automatically play as soon as players open the game. 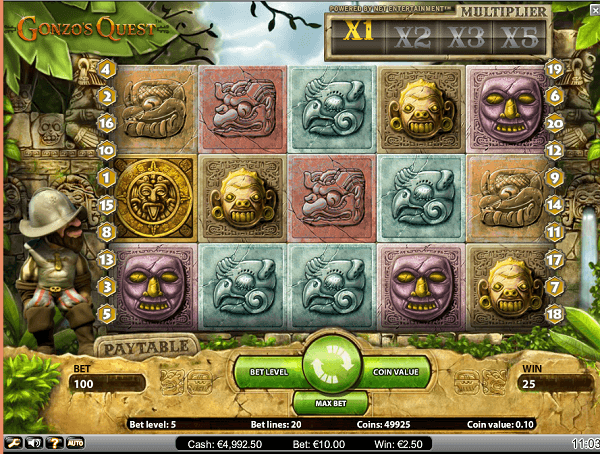 Back Break Away Free Slots
Next Hall of Gods