When players succeed in creating a winning combo, even in the free slots version, there is a small colored meter on the right side, each payout will randomly raise the meter to a certain level. The levels represent multipliers that the payout will be multiplied by.

Apart from that, if players create a winning combo that results in filing up the meter to the max, this will trigger the bonus round of the game, which is called the “Go for Goal Bonus”. This bonus is located on the left side. Players will see multiple t-shirts with multipliers on a green soccer field. Players will keep clicking on Start and Stop in order to earn as many coins as they can through the bonus. When the round is over, the winnings will be added to the line payouts that players have earned to be added to their balance.

The Wild Ball on Fire: This symbol is a very special symbol as because it lands anywhere on the game’s reels and lines, players will have a better chance at claiming a payout. This is because the wild icon will substitute for any other icons, with the exception of the scatter symbol. When it does that, only the highest payout is paid.

The Golden Goals Scatter: The logo of the game is a scatter icon that has the ability to give players scattered rewards. The special thing about the scatter icon that it can appear anywhere on the reels and it pays both ways, unlike other symbols that only pay players from the left to the right, this is why they are called scatter icons.

Golden Goals is a Microgaming powered slot game that is conveyed to players through the award winning gaming platform of Microgaming, Quickfire. The game is dedicated for the scooter fans, which explains the name of the game, Golden Goals and also explains the soccer themed visuals that dominate the interface of the game and the additional features of the slot. Players would also see a green background that resembles the ground of the soccer fields.

Apart from the soccer theme of the slot, it is a fruit machine at heart and this is why players will see a lot of fruit themed symbols appearing on the reels of the game. These fruits include lemons, grapes, cherries, pineapples and oranges. Other classic fruit machines symbols that will also land on the game’s reels include bar symbols and golden bells.

The game has a total of 20 lines and 5 reels. Players can see the formation of these paylines on the reels of the game by opening the payouts table of the game by clicking on the “Pays” button. The paytable would also show players the different payouts that the different symbols will give to players and the special wild icon of the game.

Like any fruit machine, players will have to set their wagers before they can initiate the game. They can do that by going though the available bets that can be found in a small cell under the reels. They will click on the two arrows in order to toggle between the available bet values. These values vary between 0.01 and 1 credit.

Players will then click on start in order to initiate the game and for the reels to start spinning so players can start forming combos so they can get paid. The game also comes with the Auto Play feature where players can specify their bet and choose a number of rounds so they can kick back and watch the reels as they spin and as they rack up on the great rewards that Golden Goals has in store for them. 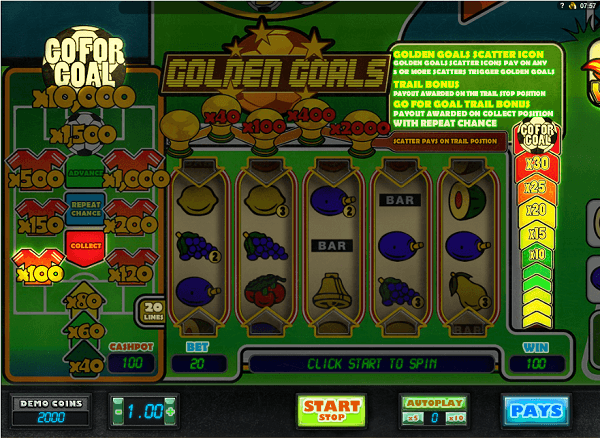 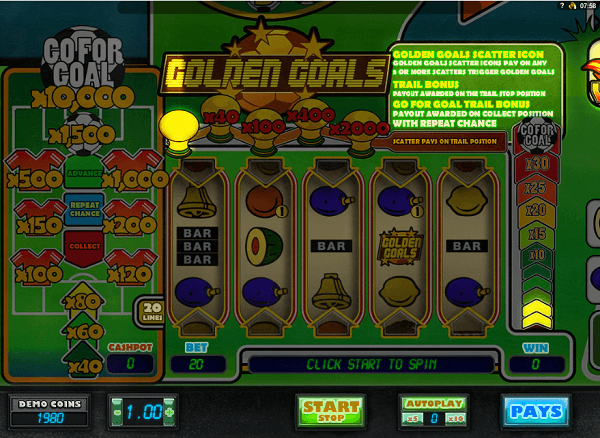 Golden Goals has a low payout percentage and was not able to crack even the top 5 ranking score from freeslots.guru