Giant Gems is a great Next Gen Gaming powered game which means that players will be able to enjoy a great selection of winning chances that will make their stay at the game worthwhile. Apart from the winning combos that the players can claim whenever they get 3 matching icons at least from left to right on any of the lines, there is the Giant Gems feature, which the game is named after.

The Giant Gems feature has to be activated via a side bet. As the Giant Gems side bet increases, the chance and the number of Giant Gems appearing on the reels would also increase, and more low paying symbols will be removed from the reels to increase the players’ chances of winning the big bucks.

The Giant Gems payouts are given out to players whenever a Giant gem is fully viewable on reels 2, 3 and 4. The highest paying giant gem is the greenish diamond that can give players x500 the placed bet.

Giant Gems does not have any characters since it is all themed around precious stones and jewels.

The symbols that are going to appear across the reels include precious stones and gems including diamonds, rubies, emeralds and more. Some of them can appear as giant gems to give players great payouts.

Giant Gems is an amazing Next Gen Gaming powered machine that is about precious stones and gems, as the title indicates. The game has a five reeled setup that homes 10 wager lines for the players to place their stakes on. The game’s glamorous and classy theme is depicted through its visuals that show many precious stones spinning as symbols across the reels.

So players better be ready for a one of a kind glamorous experience that comes baring a lot of winning chances. Players will get to claim plenty of generous line payouts, as well as grand prizes through the Giant Gems feature if they choose to activate the side bet. 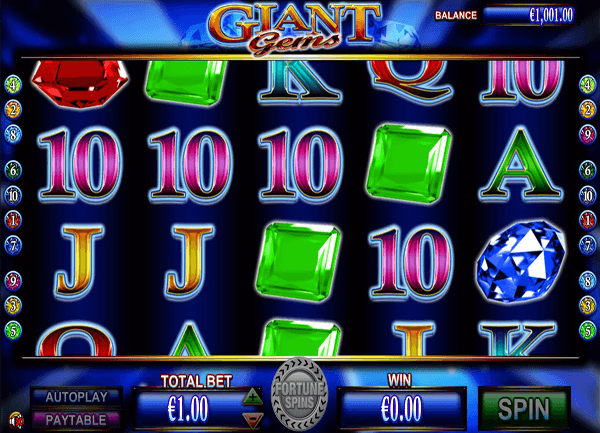 Giant Gems
slotadmin
July 10, 2016
7.4/10
Giant Gems, a Next Gen Gaming slot machine with 10 lines, 5 reels and one bonus feature that is activated by a side bet, The Giant Gems feature.
7.4 Review Score
Giant Gems

Giant Gems, a Next Gen Gaming slot machine with 10 lines, 5 reels and one bonus feature that is activated by a side bet, The Giant Gems feature.