Forest Mania is a highly rewarding video slot game that has a lot of winning chances. The game has two sets of reels, each set has 5 reels. The paylines spread across the two sets of reels. The game has a wild icon. This wild symbol is the golden W. This wild can replace any of the other icons appearing anywhere on the reels of the game in order to help the players create the biggest payout possible.

The game also has the Wild Reels feature that can be triggered at random during the game play. It is more frequent during the free spins. In this feature, entire reels become wild, giving players a lot of winning chances.

Another randomly triggered feature is the free spins. Players will trigger this feature during the game play which will give players a total of 10 free games on the slot.

Forest Mania’s three main characters are the magical creatures that the players will join in this magical adventure. There is also the 2 big eyes creature that the players are going to join.

Forest Mania’s symbols include the different gems and magical fruits that the magical forest has.

Forest Mania is the latest title by iSoftBet that has hit the market. Due to the nature of the game, its rewarding features and its amazing game play, it has become one of the favorite games. The game has two sets of reels that host a total of 100 wager lines in total. The game takes players to a magical forest with three magical creatures. 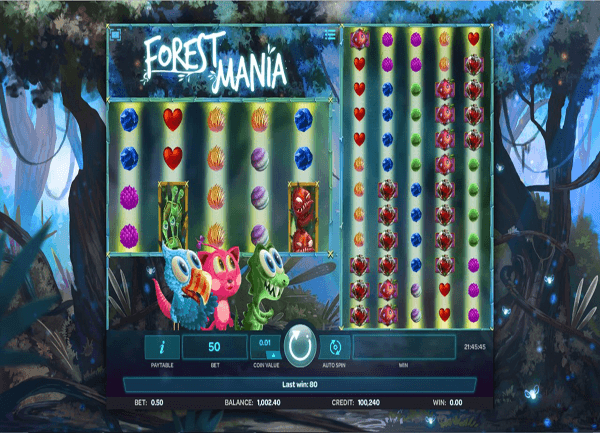 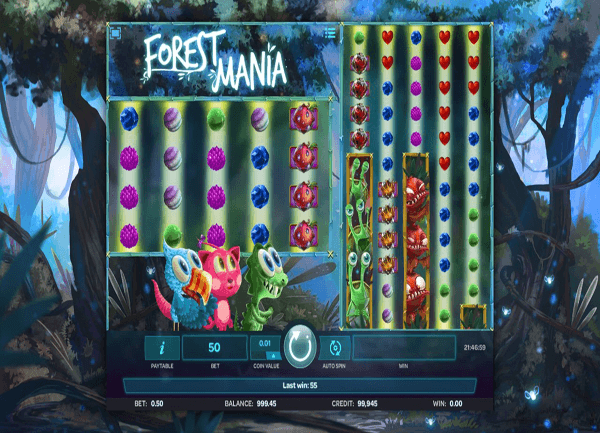 Forest Mania
slotadmin
February 27, 2017
7.5/10
Forest Mania is an iSoftBet powered video slot machine that has two sets of 5 reels that offers a total of 100 wager lines that can be quite lucrative for its players.
7.5 Review Score
Forest Mania

Forest Mania is an iSoftBet powered video slot machine that has two sets of 5 reels that offers a total of 100 wager lines that can be quite lucrative for its players.