Dynasty is a 20 lined video slot machine by Next Gen Gaming that is packed with a great set of special features and winning chances for its players. The special features of the game begin with the wild icon. The wild comes in the form of the Chinese golden emblem. This golden emblem is going to stand in for any of the other icons, across the reels of the game, to help players create the highest possible combo, on each of the lines that the wild has landed on.

The only icon that the wild symbol is not going to replace is the scatter icon, which comes in the form of the Chinese Dynasty Emperor who ruled over China with this Iron fist. This scatter can give out scattered rewards that are going to be multiplied by the placed bet when players manage to get from 2 to 5 scatters anywhere on the reels of the game. That is not all, as a minimum of three emperor icons appear on the reels and players will get to spin the reels 10 times for free, with the ability to re trigger even more free spins.

The game has got one character only, which is the Emperor of the great Chinese Dynasty.

The symbols include the golden emblem of the dynasty , swords, the banner of the Chinese dynasty, a Chinese arch and colorful poker card symbols.

Dynasty is a 5 reeled slot machine that has 20 wager lines. The game takes players on a great historic ride that is full of action. The game takes players to the Ancient Chinese civilization as they join the Dynasty Emperor as he commands his soldiers as they defend the Great Wall of China against the Mongolian invading hordes.

So players better be ready for an action packed ride that is like none other that is packed with many bonuses, features and winning chances for them to claim. All info about the special features and payouts of the slot can be found at the INFO page of the game. 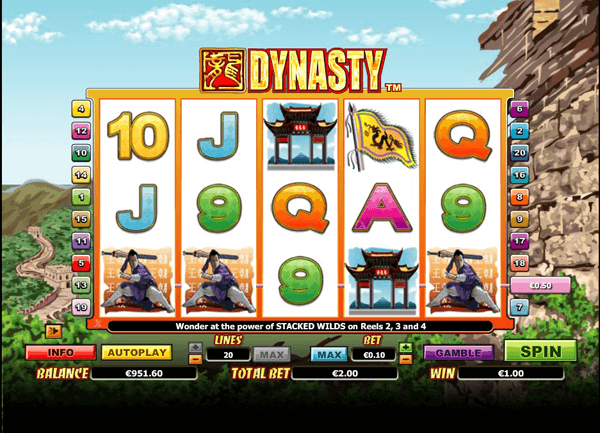 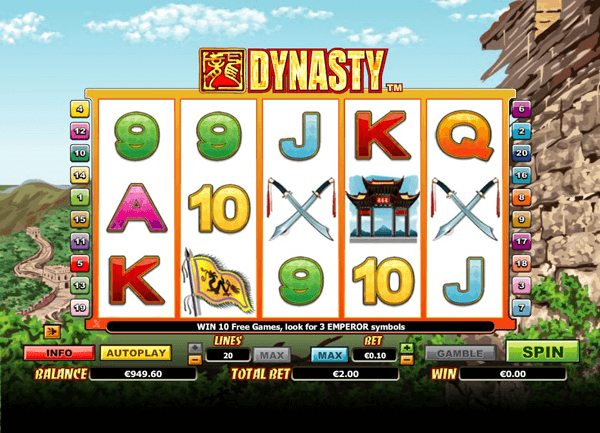 Dynasty Slot
slotadmin
July 30, 2016
7.6/10
Dynasty is a five reeled game that has a Chinese Historic theme that takes players to the time of the dynasty Emperor as he fights against the Mongolian invading hordes and defends the Great Wall of China.
7.6 Review Score
Dynasty

Dynasty is a five reeled game that has a Chinese Historic theme that takes players to the time of the dynasty Emperor as he fights against the Mongolian invading hordes and defends the Great Wall of China.