Dragons Rock video slot machine by Genesis Gaming is packed with a couple of special icons that would make sure that the players’ stay at the game is worthwhile. The first of these icons is the wild golden dragon. This wild golden dragon symbol is the substitution symbol of the game, which acts like the joker in a deck of cards. So whenever this wild lands anywhere on the reels, it is going to replace any of the other icons of the game to create the highest paying combo on the different lines. The only symbol that the wild can’t replace is the scatter icon, which is the scatter bonus dragon egg. The wild can also give generous line pays when it gets matched on the lines of the game, as it can dish out up to 1500 coins when 5 of them land on the same reel.

The scatter symbol of the game is the bonus dragon egg. Whenever players manage to get three of these icons on reel 1, reel 3 and reel 5, they will trigger the bonus round of the game. Through this bonus round, players will choose one of many dragon eggs that are laid out in a cavern in order to reveal the prizes they hold. This includes multiple features, line prizes and a free spins round.

The game’s characters are the different dragons that players will see at the dragon island that the game takes them to.

The other symbols include the golden wild dragon statue, the bonus dragon egg, the logo of the game and the colorful poker card symbols.

Te game is presented in awesome visuals that depict the theme of the game greatly to provide players with a really immersive experience that is like none other. It comes in 5 reels and a total of fifty wager lines that are full of rewards and features, as well as dragons. 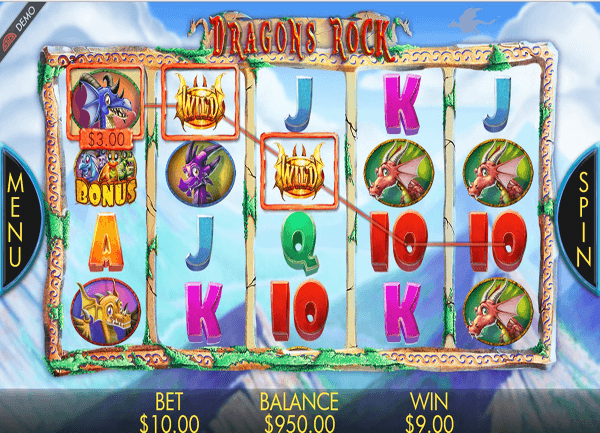 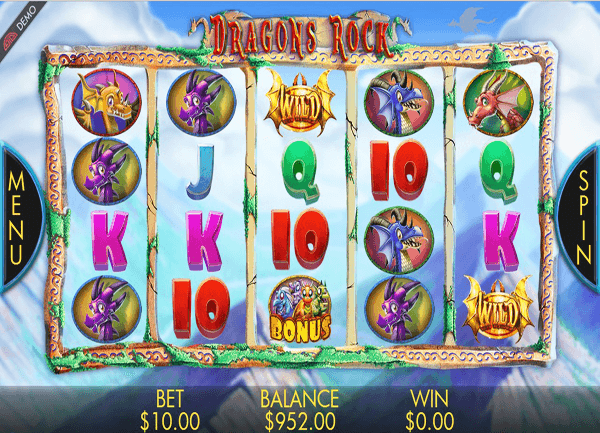 Dragons Rock
slotadmin
May 26, 2016
8/10
Dragons Rock is a five reeled, fifty lined video slot game that takes players on a fun ride into the dragon’s island that is full of great fortunes and rewards.
8 Review Score
Dragons Rock

Dragons Rock is a five reeled, fifty lined video slot game that takes players on a fun ride into the dragon’s island that is full of great fortunes and rewards.