Clover Tales is a five reel slot machine by Playson. The video slot machine comes packing a great set of rewarding features and bonuses. They all start with the wild icon, this wild symbol comes in the form of the pot that is full of golden coins. The wild is going to replace all of the other symbols on the reels of the game. In addition to replacing other symbols for the best payout, the wild pot of gold can also result in great results when you match it on the lines of the game.

Other than the wild symbol, the video slot machine has the Rainbow Line feature. During the gameplay, with every spin, one of the stake lines will become a rainbow. If you manage to create a winning combo of symbols on any of these rainbow lines you will trigger one of two features. You can trigger the free spins round, or the re-spin. In addition, if you land a wild on any of the rainbow lines, the wild will expand in order to cover the entire reel, helping you create multiple payouts across the reels.

The other symbols are all inspired by the Irish luck charms as they include the Leprechaun’s pipe, the pot of gold, the golden horseshoe, and the green four-leaf clover.

Clover Tales is a new slot by Playson. The new slot machine, as clear from the title that the developer has chose for the game, takes you to the Irish lands, where you will search for the golden fortunes and treasures of that land. You will join a Leprechaun and a Fairy on this experience as they lead you on a great adventure. The Leprechaun will appear on the left side, sitting in the great landscape in front of his house, while smoking his pipe. As for the fairy, she will appear for you as a symbol during the gameplay. The slot has nine line, five reels, 3 rows of symbols with great visuals and animations. You can also expect to find multiple bonuses and features such as the Rainbow feature. 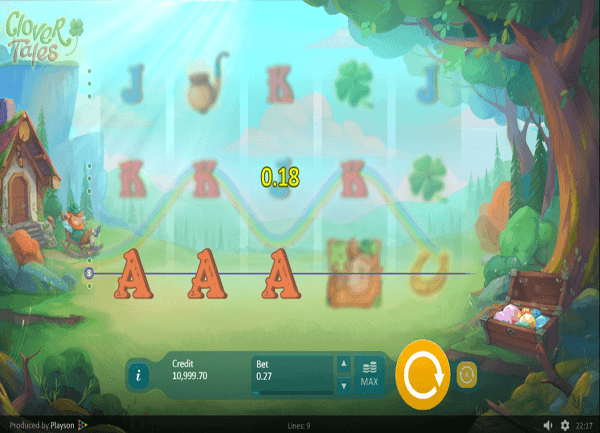 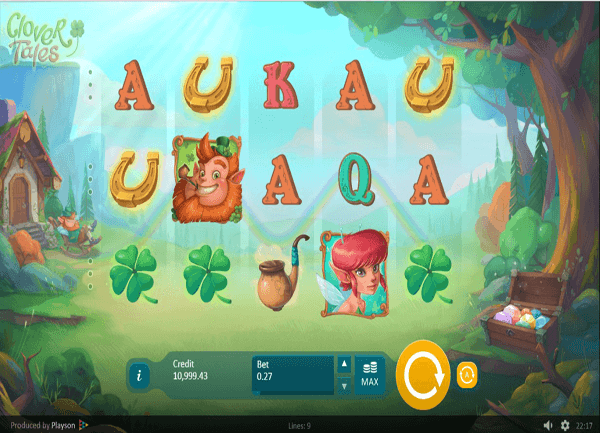 Clover Tales
slotadmin
October 25, 2017
7.8/10
Clover Tales by Playson is a fun and a rewarding game that has five reels, nine lines with three rows. The slot machine has an Irish theme that comes packing plenty of bonuses and features, as well as great animations and visuals.
7.8 Review Score
Clover Tales

Clover Tales by Playson is a fun and a rewarding game that has five reels, nine lines with three rows. The slot machine has an Irish theme that comes packing plenty of bonuses and features, as well as great animations and visuals.