The surprises do not stop there as these free spins come with the Rolling Reels Multipliers feature. This means that when players succeed in forming a line payout during the free spins, the matching symbols will explode and disappear and new symbols will fall into their place to form new combos and more chances of winning, and with every consecutive win, the multiplier will increase until it can reach 10x. The free spins round cannot be re triggered during the round itself, it can only be activated through the base game.

The game also has the smashing Wild feature. This feature is triggered randomly during the base game in which 2 hockey players will smash into the 2nd, the 3rd or the 4th reel to turn them into wild reels with a guaranteed win. The Free spins round cannot be triggered during the smashing Wilds feature.

There is no doubt about it, since the game is themed around ice hockey, players will see plenty of ice hockey players spinning in the form of symbols on the reels of the game. The players are from multiple teams and they wear different colored shirts as well as the ice hockey match referee. As for the other symbols, they include the stadium, the logo of the game, the ice skater shoes and the goalie outfit.

The Logo of Break Away: This symbol acts as a wild symbol, it can replace any of the other icons that appear anywhere on the reels of the game, with the exception of the scatter fiery Ice hockey ball, to help players create a winning combination of symbols. It can also appear stacked on the last four reels of the game.
The Scatter Hockey Ball: This icon is responsible for activating the free spins round that comes with the rolling reels multipliers feature.

The sport of Ice hockey is a vicious and a violent, yet an exciting sport that has millions of fans across the world, especially in Canada. It is about two teams who are on ice skaters who use their hockey sticks in order to control the ball, pass it to each other and score points in the other team’s goalie.

If you are a fan of this sport, then this is the right video slot machine for you. This Microgaming video slot machine, Break Away, is dedicated for all of the ice hockey lovers and invites them to enjoy a truly exceptional gaming experience that is offered to them in outstanding visuals, sound effects and comes packed with plenty of special features and symbols that will make the players’ stay at the game worthwhile. 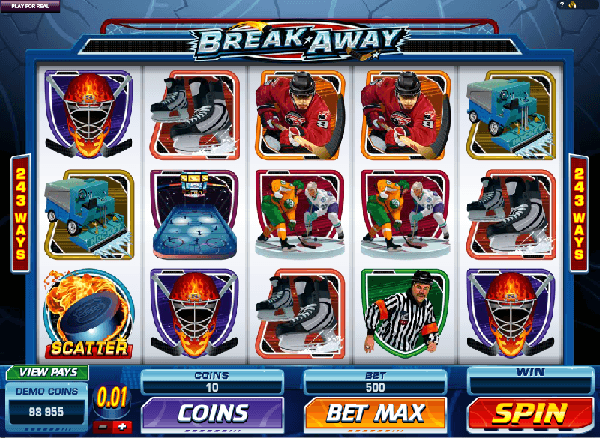 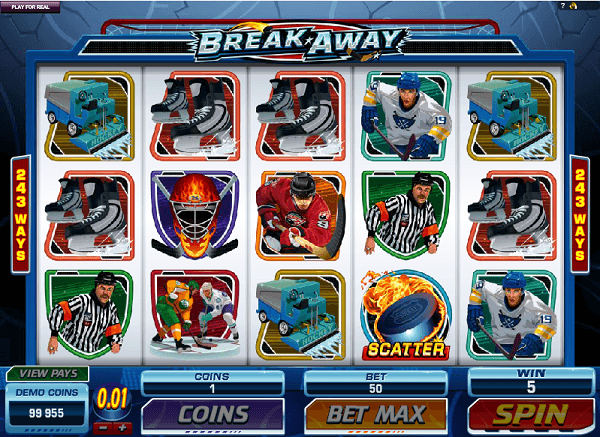 Break Away Free Slots
slotadmin
June 6, 2014
7.8/10
Break Away is a fun, free slots game revolving around the goals and tribulations of hockey teams.
7.8 Review Score
Break Away Slots Game

Break Away is a fun, free slots game revolving around the goals and tribulations of hockey teams.

Back Aliens Slots
Next Gonzo’s Quest