Avalon II is filled with bonuses and surprises. For example, Merlin the wizard can appear out of nowhere randomly during the game play in order to help players on their quest to get paid by giving them cash prizes or by giving them multipliers.

The other special symbol is the Lady of the Lake, this symbol is wild and can replace all other icons to help players form a winning combo. On top of that, it is an expanding wild, which means that when it appears on the 3rd reel, it would expand to cover the entire reel turning it wild.

Apart from that, the game has a multi leveled bonus round that is called the Grail Bonus, it has eight possible bonus rounds that give players plenty of rewards. It is triggered when players get at least 3 grail bonus symbols anywhere on the reels. In the first level, which is called the Lake of Legend, players will try to re-forge the Excalibur sword by rolling the dice. Then there is the Misty Vale bonus, in which players will choose an extra wild and enjoy 15 free spins on the video slot machine. Players will then choose a path, whether the Whispering Woods or the Forest Falls. The bonus rounds keep following each other until they end with the Isle of Avalon.

The characters of the game are all inspired by its theme, which is the myth and legend of King Arthur and his adventures. This is why they include Merlin the wizard, a fair queen, King Arthur, the Black Knight, Guinevere and Morgan. They all appear in the form of symbols on the reels and the lines of the video slot machine and they can turn into animations when they are a part of a winning combination.

The rest of the symbols are also inspired by the same theme as they include the logo of Avalon II, a chalice, a crown and card symbols that come in royal designs to fit the medieval theme that the video slot machine is trying to convey to its players.

Avalon II is the sequel of Avalon. Like the first game, the video slot takes players into the medieval times where they can accompany plenty of characters from the legend of King Arthur, including the king himself, his queen Guinevere, the black knight and Morgan as well as Merlin the Wizard.

Arthur needs to re-forge the Excalibur sword in order to be able to beat the black knight and save his queen, Guinevere. Across his travels, he will meet Merlin who will use his magical powers to help him. Players will be rewarded greatly for their bravery and their help. These rewards can come in the form of regular payouts that the 243 ways to win format has to offer them or through the bonus symbols and features that the game has. Players can check out all of these special features and the bonus round of the game by opening the payouts page of the game by clicking on View Pays.

The game, being a Microgaming powered slot, comes in advanced graphics and sound effects that succeed in creating an immersive and an engaging gaming experience for the players. Players can try out the game for free right here so they can test the waters and check all of the bonus rounds and payouts before heading to online casinos such as Guts casino, Lucky Nugget and Gaming Club in order to place real money bets and earn back real rewards. 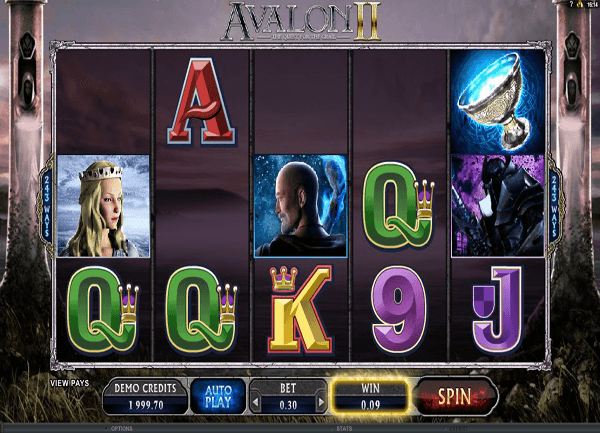 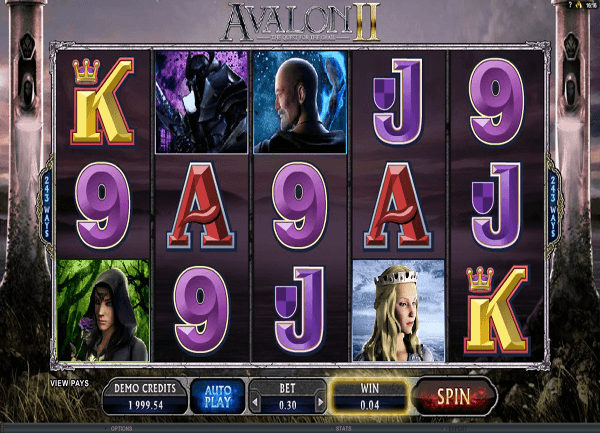 Avalon II Free Casino Slot
online slots
August 6, 2014
7.5/10
Avalon II is the sequel of one of the most popular games from Microgaming, Avalon. The game will take players into a medieval theme where they can accompany Arthur, Merlin and his queen Guinevere as well as the Black Knight in their adventures through this 5-reeled, 243 ways to win video slot machine.
7.5 Review Score
Avalon II

Avalon II is the sequel of one of the most popular games from Microgaming, Avalon. The game will take players into a medieval theme where they can accompany Arthur, Merlin and his queen Guinevere as well as the Black Knight in their adventures through this 5-reeled, 243 ways to win video slot machine.