Attack of the Zombies

Attack of the Zombies is a five reeled slot that comes baring a lot of rewards and bonuses for its players. This does not come as a surprise to anyone since the game is from the portfolio of Genesis Gaming. It all begins with the wild icon, which comes in the form of the brain. This also does not come as a surprise since the game is all about the brain eating zombies.

This wild icon would act as a substitution icon that can replace all other icons on the game’s reels. On the other hand, it would not replace the bonus icons of the game. Also, only the highest payout is given out when the wild substitutes for an icon. The wilds can also give line payouts when matched.

Back to the bonus symbol, they give out scattered payouts when players get from 3 to 5 of them anywhere. They will give scattered rewards that are multiplied by the wager. Also, 3 of these symbols would trigger the Antidote free spins round. During this round, the zombie hunters will turn into zombies. Players will collect antidotes and try to help them while claiming plenty of rewards.

Attack of the Zombies Games Info

The game has 4 main characters. They are the 4 female zombie hunters that players will join during the game play. Other secondary characters include the zombie kings and the low paying zombies as well.

The symbols include the wild brain and the antidote.

Attack of the Zombies is the newest game by Genesis Gaming. The slot takes players on an amazing ride as they accompany 4 zombie hunters as they do what they do best. Players will join them as they hunt down zombies in a haunted cemetery. Players will also get to claim plenty of rewards and prizes along the way. They can do that through the 50 wager lines that the game has, as well as with the help of the game’s special icons.

The game is presented in awesome visuals that depict the theme of the game perfectly. This helps players enjoy an immersive ride that will always have them on the edge of their seat.

Attack of the Zombies Screenshot 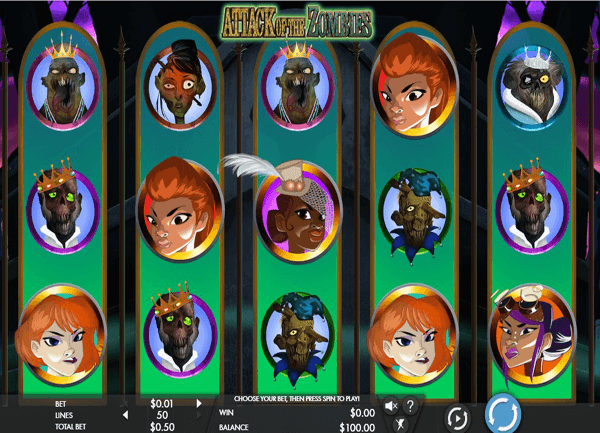 Attack of the Zombies Screenshot 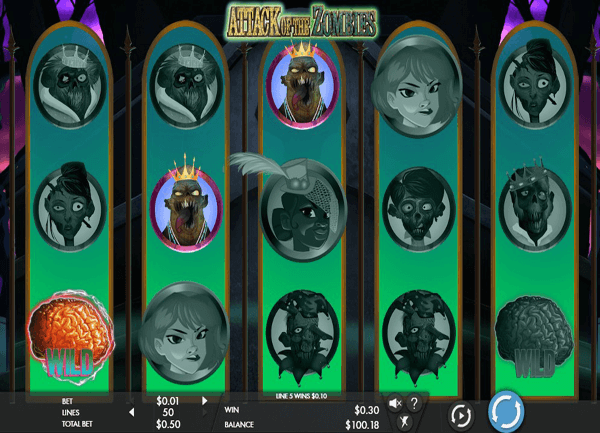 Attack of the Zombies is a new Genesis slot game that has a zombie hunting theme. The slot has 50 lines, 5 reels and plenty of special icons.