Alkemor’s Tower is a game that is all about magic and Wizardry, and this is why players can expect to find a great set of magical bonus features. For starters, players will have the chance to cast elemental spells. Players will do that when they manage to get spell books on reels 1 and 2, and getting an elemental symbol on reel three. There are 4 elemental potion spells, earth, fire, water and air, as they represent the 4 elements that form our world. The kind of potion that will land on the 3rd reel is going to determine the kind of spell that will be activated as each potion can activate different features. If players get a spell book on reel 4 or 5, this will empower the spell.

The spells books on their own can trigger another highly lucrative bonus feature of the game, the free spins round. This will happen when players collect 3 spell books. They will be able to claim 10, 12 or 15 free spins, depending on the number of spell books that they collected.

Lastly, there is the Vine symbol, when this symbol lands anywhere on the 3rd reel, it is going to devour its neighboring symbols and players will get to earn a reward for each symbol that is devoured by the Vine symbol.

The game has got one character only, Alkemor, the owner of the magical tower that players will enjoy through this video slot. He will not only appear as a symbol on the reels, as he will accompany players during the game play as he appears on the left side, floating in the air like a true wizard.

The symbols are inspired by the magical theme of the game as they include elemental potions, spell books, a Vine, magical flowers, the Black Hole, a green diamond, precious stones, and a magical scroll among other symbols.

Alkemor’s Tower is the newest Betsoft Gaming powered game, this is why when players decide to try out this game, they are guaranteed a fun experience that has a wonderful theme and visuals. The game is also a 3D game, as the usual and what can be expected from Betsoft Gaming video slots. The game takes players on a great adventure that takes place inside Alkemor’s Tower, which is the tower of a magical wizard who will join players during the game play.

During the adventure, players will get to claim multiple rewards and trigger many features and cast spells so they can enjoy a lucrative game, all through the 5 reels and the 243 ways to win of the slot. 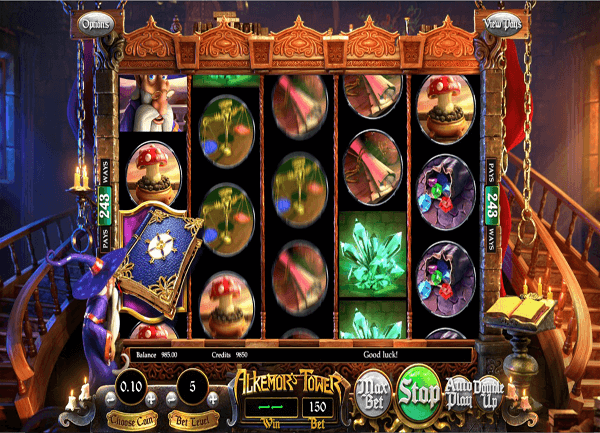 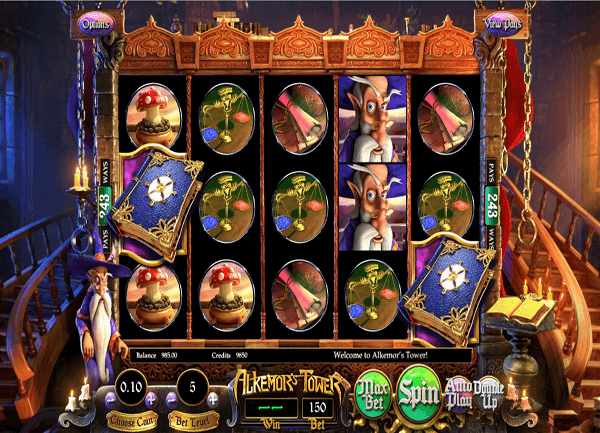 Alkemor’s Tower
slotadmin
November 7, 2015
7.8/10
Join Alkemor, the great wizard for a one of a kind experience in Alkemor’s Tower that is full of rewards and bonuses. Check it out here for free.
7.8 Review Score
Alkemor's Tower

Join Alkemor, the great wizard for a one of a kind experience in Alkemor’s Tower that is full of rewards and bonuses. Check it out here for free.