The Aliens Slots machine game has an interactive and an exciting bonus game, it all depends on the alien activity meter. Players will get to see this meter at the top of the reels during the game. This activity meter has places for 9 spots, whenever players succeed in creating any winning combo, they will score 1 point in the Alien Activity Meter. On the other hand, for every spin that does not result in a winning combo, 1 point will be deducted from the meter. Once players have managed to max out the alien meter, the will get to trigger the second level of the bonus game, which is called the Encounter.

Any multipliers earned during the first level will be used in this level and will be applied to its payouts. This second level has 2 parts. The first spin is going to show players 3 lower value symbols on the first three reels, which will activate a line payout. The 2nd part is the Ammo Clip Reel which is going to fill up with one clip for the weapon. When the Ammo symbols land on the center position of the reel, the ammo clip is going to increase by one or two. Players would use the ammo to shoot at the aliens and they will lose one clip for every shot missed. Players will have to go through ten steps before they can complete the second level in order to trigger the last and the most rewarding level, Level 3, the Hive.

The Hive level starts with four ammo clips and five free spins on the slot game. The players will starts to use their weapons and the grenades in order to reduce the hive health to zero so they can kill the queen and win an award that can amount up to 240x the bet.

The game only has one special symbol that players should keep an eye out for, which is the Weyland-Yutani Corporation logo. This symbol is wild and can replace any of the other symbols with no exceptions. It can land on the 2nd, 3rd, 4th and 5th reel during the main game and anywhere on the reels during the second level of the bonus round.

Characters of the Game
Since the game is themed around the movie, players can expect to find plenty of aliens as well as marines spinning on the reels of the game in wonderful visuals.

Who did not enjoy the amazing Sci-Fi alien themed movie franchise that released its first movie back in 1986 under the name of Aliens which starred Sigourney Weaver and was directed by James Cameron? The movie was themed around the fight between the human race and an alien predator species that wanted to devour the human race.

The movie franchise followed different stories and phases in the alien vs. human fight, some of it took place in outer space and on other planets. If you are a fan of this wonderful movie, then you will surely get to enjoy this Net Entertainment powered video slot machine that is themed around the great movie. The game depicts the theme of the game through its great graphics and sound effects that succeed in capturing the grim and the gritty essence of the movie. So buckle up, grab your weapon and get ready to fight some aliens. 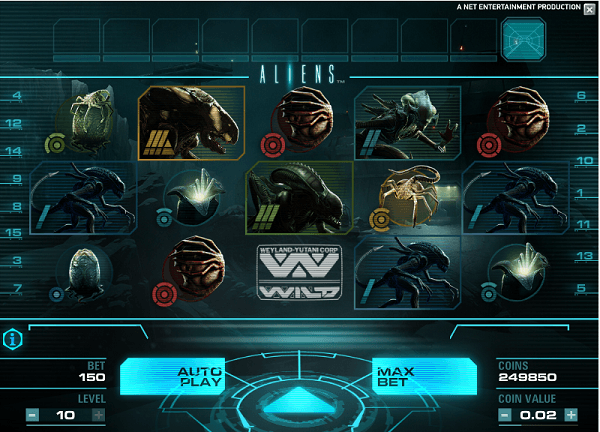 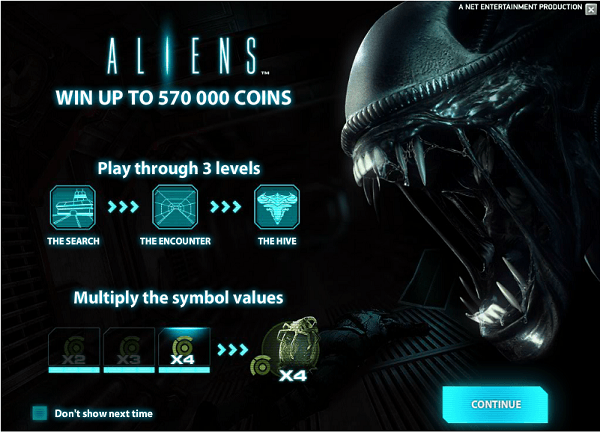 The slots game based on the thrilling, sci-fi, space drama Aliens. The film Aliens with the successful sequel to the popular Alien films.

Back Starburst Slots
Next Break Away Free Slots