4 Seasons is the newest Betsoft Gaming powered 3D slot that comes baring a lot of surprises for its players when it comes to features and bonuses. For example, this new 3D video slot comes with the unique feature, the Seasonal Wheel, which is quite fitting to the theme of the game which is all about the seasons. This wheel is located at the bottom left and it has all of the different animals' symbols that would land on the reels. The animal that is at the top of the wheel is the golden animal that would pay 10x whenever it is matched on the lines of the game, with the ones on its left and right being silver animals that would pay 5x. With every seasonal change, the wheel will rotate selecting a new golden animal with 2 silver ones.

The game also comes with a wild icon, which comes in the form of the Golden Cat zodiac. This golden cat can substitute for all other icons, with the exception of the scatter Ying Yang symbol. It can also give a high payout of up to 10000 coins when it is matched on any of the bet lines.

Lastly, there is the scatter Ying Yang icon that can trigger the free spins round when 3, 4 or 5 of them land on the reels, giving players 8, 12, or 20 free spins respectively.

The characters of the game are the different Asian animal Zodiacs. They include a golden cat, a tiger, a lion, a chicken, a pig, a horse and more.

The game’s only other symbol that does not represent an Asian zodiac animal is the Ying Yang scatter symbol.

4 Seasons is a 3D video slot machine that is powered by none other than Betsoft Gaming. The game has a wonderful and a unique theme as it takes players to the Far East, to China. This is apparent from the designs of the symbols, the reels and the background. The game focuses more on the Chinese Zodiac animals, and this is why players will see all of these Zodiacs as symbols appearing across the reels and lines of the game. Speaking of which, the game has 5 reels with 30 fixed paylines.

The game is entitled 4 Seasons as during the game play, there is a seasonal wheel that affects the game, and players will also see the change in the weather in the background as the seasons change. 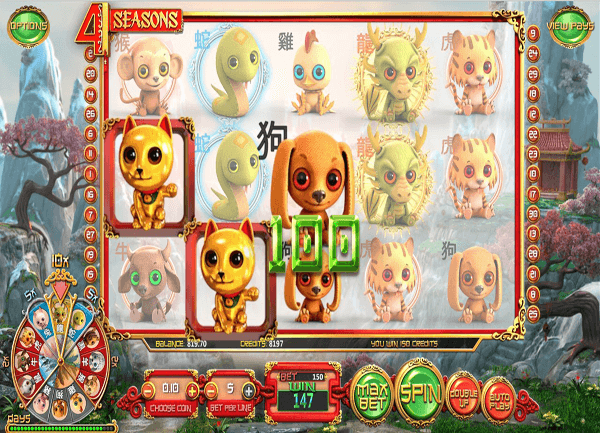 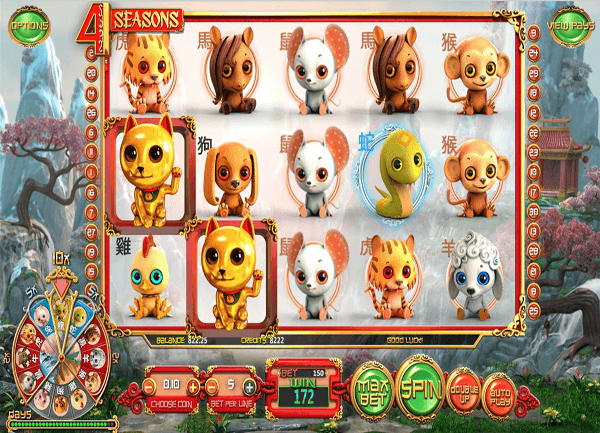 4 Seasons is the brand new Betsoft Gaming powered 3D slot game that has a unique game play with plenty of special and unique feature for players to enjoy.